China Theme Park To Raise The Titanic, With Wi-Fi 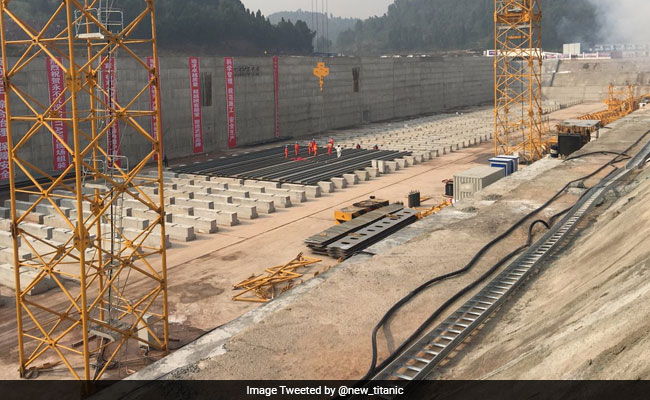 Construction of the world's first full-size replica of the Titanic has begun in China.

Shanghai: Construction of the world's first full-size replica of the Titanic has begun in China, state media reported Thursday, where it is expected to enjoy smoother sailing as a lakeside tourist draw than its namesake.

The 269-metre (883-foot) long, 28-metre wide ship will be docked permanently on a reservoir in a rural area of Sichuan province, the official Xinhua news agency cited a senior executive of the shipbuilder as saying.

It will feature an interior reproducing some of the grandeur of the original including a ballroom, theatre, swimming pool and first-class cabins, with the addition of wifi, said Wuchang Shipbuilding Industry Group's deputy general manager Wang Weiling.

The supposedly unsinkable ocean liner, which struck an iceberg and went down in the north Atlantic in 1912, killing more than 1,500 people, is a subject of immense fascination for many in China.

The new ship will be the centrepiece of a theme park hundreds of kilometres (miles) from China's coast bankrolled by Chinese energy company Seven Star Energy Investment Group.

The company first announced plans for the 1 billion yuan ($150 million) project in 2014.

The ship's design is based on the original, and construction will involve assistance from US and British designers and technicians, Xinhua said.

AFP was unable to immediately reach the companies involved.

Flamboyant Australian tycoon Clive Palmer in 2013 unveiled plans to build a replica of the Titanic that could actually take to sea and would seek to complete the original ship's doomed Atlantic crossing, but that project has reportedly run aground amid funding difficulties.

Domestic tourism is booming in China, promoted by the government as a way of fuelling consumer-driven growth rather than its decades-old model of investment and industry.

Theme parks are being built in the country faster than anywhere else in the world, with more than 300 projects reportedly funded in recent years.

(This story has not been edited by NDTV staff and is auto-generated from a syndicated feed.)
Comments
TitanicTitanic replicaChina theme park