Children Among Hundreds Of Rohingya Detained In Myanmar Crackdown 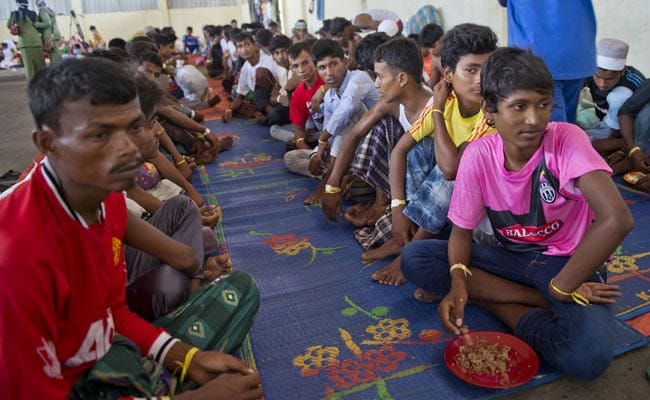 Myanmar is under pressure over alleged abuses including killings and mass detentions against Rohingyas.

Sittwe: Children as young as 10 years old are among hundreds of Rohingya Muslims detained on charges of consorting with insurgents, according to a police document seen by Reuters that sheds new light on Myanmar's security campaign in the country's northwest. Thirteen juveniles are among more than 400 people arrested since Oct. 9, when insurgents attacked three police border posts in northern Rakhine State near the frontier with Bangladesh, the March 7 dated document shows.

Police said some of the children had confessed to working with insurgents and that they were being detained away from adult suspects.

A government spokesman confirmed children were detained in the operation, but said authorities had followed the law. He said he knew of only five juveniles currently being held.

Myanmar's leader and Nobel laureate Aung San Suu Kyi, who took power almost a year ago, is under international pressure over alleged abuses including killings, gang rapes and mass detentions against the stateless Rohingya, about 1.1 million of whom are prevented from travelling freely and accessing basic services in Myanmar.

The government has released few details about the hundreds detained in the Rakhine operation or the charges they face.

The document seen be Reuters lists 423 people held under the colonial-era Unlawful Associations Act. All appear from their names to be male. Their average age is 34, but the youngest is 10 and the oldest 75. One has been crossed out and marked "dead".

Two police captains in Maungdaw, the district at the centre of the violence, confirmed the veracity of the 11-page document.

"We police have to arrest those related with the attackers, children or not, but the court will decide if they are guilty, we cannot decide," said Police Captain Than Shwe.

Reuters was unable to establish whether all those provisions, such whether they have been able to communicate with their families or have legal representation, were being followed.

All 13 juveniles below the age of 18 were sent to be detained outside of prison at a Border Guard Police (BGP) facility in the town of Buthidaung, and were not shackled, said the second police captain, who did not want to be identified.

"Some of the children already confessed that they are involved with the attackers group during interrogation," the police captain said. They were not beaten during questioning, he said.

Domestic law says children aged between seven and 12 are only criminally responsible if mature enough to understand the consequences of their actions. Two listed detainees are under 12, while two more are 13.

Authorities were under strict orders not to violate detainees' rights, Zaw Htay said, adding: "We will not forgive anyone who does."

Cases had been opened against all 423 people on the list under the Unlawful Associations Act, said the second police captain. Many on the list, which is not a complete record of all those detained in the operation, were also charged with additional crimes, including murder, he said.

"We suspect that these people joined the attackers' training or supported them with funding, or they cooperated during the attacks or were involved in the attacks," he said.

Rights groups such as Amnesty International say the Unlawful Associations Act has long been used to arbitrarily arrest and detain ethnic and religious minorities in Myanmar.

In a statement to the U.N. Human Rights Council in Geneva, Myanmar said 526 people were "under interrogation" relating to the conflict. Eight detainees had died in custody, the government said.

The government has set up two "special courts" in Buthidaung, said Rakhine's senior state judicial official, advocate general Kyaw Hla Tun. The government would not block the accused from accessing lawyers, he added.

"We want to process them quickly. There are security concerns with the prison being over capacity," he said.

U.N. human rights envoy Yanghee Lee visited Buthidaung prison, where most detainees are being held, in January. Most did not have lawyers, were not informed of the charges against them and had not been able to contact their families, she said.

Reuters also spoke to people who had been released from detention and later fled across the border to Bangladesh, a journey made by about 75,000 refugees since the conflict began.

Di Dar, 22, said he spent 10 days in a military camp after his village was burned in mid-November. The 300 or so people detained with him were constantly handcuffed and beaten during interrogations, and he witnessed two men killed, he said.

Reuters was unable to corroborate his account, or similar accounts from three other former detainees.

Promoted
Listen to the latest songs, only on JioSaavn.com
"The soldiers would come three times a day and would beat us for about an hour at a time," Di Dar said. "They asked, 'Did you fight us?' 'Were you involved in the insurgency?'"
© Thomson Reuters 2017

(This story has not been edited by NDTV staff and is auto-generated from a syndicated feed.)
Comments
RohingyaRohingya MuslimsRohingya GenocideMyanmar