"It is not thought that any of the injuries are life-threatening," the police said, adding, it was "too early to tell" whether it was intentional or a traffic accident. 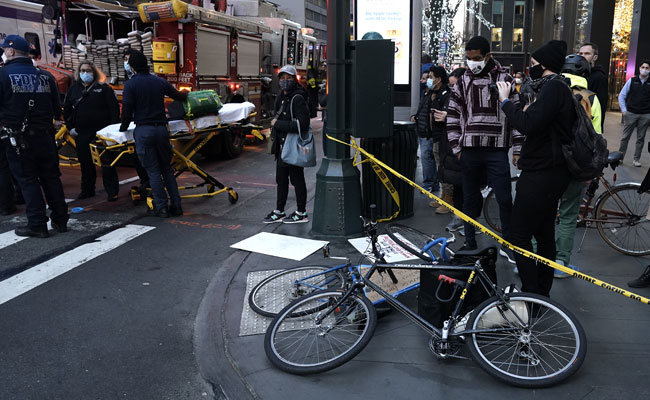 New York City: The driver is in custody, the police said.

A motorist struck about half a dozen people taking part in a protest in New York City on Friday, causing injuries but no deaths, police and eyewitnesses said.

"An unknown number of people have been injured. They have been taken to various hospitals. It is not thought that any of the injuries are life-threatening," he said.

The spokesman added that the driver, a woman, had stayed at the scene and was in custody.

The spokesman said it was "too early to tell" whether it was intentional or a traffic accident, and it is not yet known whether the driver will face charges.

They were protesting against the detention of immigrants by Immigration and Customs Enforcement agents. The protesters were marching in support of detainees on hunger strike.

Local media initially reported that the protest had been a Black Lives Matter demonstration.

ABC News said between 40 and 50 protesters were in the area at the time.

The outlet said the demonstration had spilled onto the street and that protesters had surrounded a car.

The car then drove into the protesters, injuring at least six of them, ABC added.

An eyewitness told NBC that the car was a navy BMW with two women, who were white, sitting in the front seats.

"They hit, to my knowledge, at least six of our non-violent protesters," she told the network, adding that she ran out of the car's way.

"I heard people screaming... I looked behind me, (and) a woman is plowing through," she said.

The protester added that she saw "bodies flying" through the air as people scrambled to get out of the vehicle's path.

"I look up, the car is speeding, people are trying to run. There were bodies and people fleeing to people sitting on the sidewalks who got hit."

A protester called Joey, who declined to give his surname, told AFP that he thought the woman had accelerated into the crowd on purpose.

"It was absolutely intentional. (She) just drove right through," he said.