The kingdom was angry at Ottawa for openly denouncing a crackdown on rights activists in Saudi Arabia. 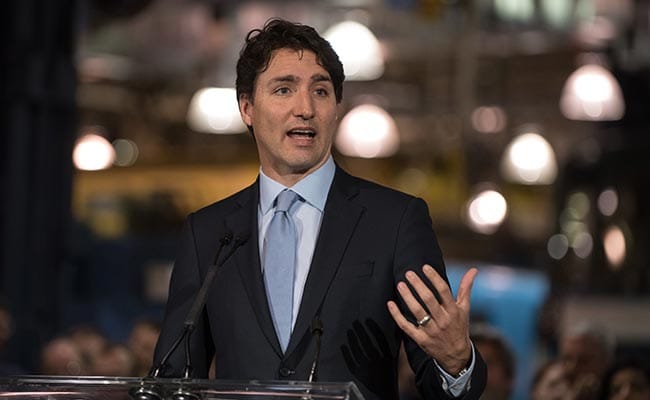 Justin Trudeau refused to apologize for calling out Saudi Arabia on its human rights record. (File)

Canadian Prime Minister Justin Trudeau on Wednesday refused to apologize for calling out Saudi Arabia on its human rights record, after Riyadh said it was considering further punitive measures against Ottawa over its criticisms of the kingdom.

Tensions have been high between the two countries since Monday, when Riyadh expelled Canada's ambassador, recalled its own envoy and froze all new trade and investments.

Riyadh also said it will relocate thousands of Saudi students studying in Canada to other countries, while state airline Saudia announced it was suspending flights to Toronto.

The kingdom was angry at Ottawa for openly denouncing a crackdown on rights activists in Saudi Arabia.

But on Wednesday, Trudeau stood firm.

"Canada will always speak strongly and clearly in private and in public on questions of human rights," he said.

"We do not wish to have poor relations with Saudi Arabia," he added, saying Ottawa recognizes that Riyadh "has made progress when it comes to human rights."

Trudeau noted that his foreign minister, Chrystia Freeland, had "a long conversation" on Tuesday with her counterpart Adel al-Jubeir to try to resolve the dispute.

On Wednesday, Saudi state media said the kingdom has nevertheless also stopped all medical treatment programs in Canada and was working on transferring all Saudi patients there to other countries.

Further straining ties, the Saudi central bank has instructed its overseas asset managers to dispose of their Canadian equities, bonds and cash holdings "no matter the cost," the Financial Times reported.

But in an apparent effort to safeguard its economic interests, Saudi energy minister Khalid al-Falih said the dispute will not affect state oil giant Aramco's clients in Canada.

Saudi oil supplies are independent of political considerations, Falih was quoted as saying by state media.

That arrest came after more than a dozen women's rights campaigners were detained and accused of undermining national security and collaborating with enemies of the state.

When asked about the jailed activists, Jubeir on Wednesday reiterated the government's stance that they had been in contact with foreign entities, but did not specify the charges against them.

"The matter is not about human rights, it is a matter of national security," Jubeir told reporters.

"Saudi Arabia does not interfere in the affairs of Canada in any way. Therefore, Canada must correct its actions towards the kingdom."

Jubeir ruled out mediation as a way to put an end to the row.

"There is nothing to mediate," he said.

"Canada made a big mistake... and a mistake should be corrected."

Jubeir added that Saudi Arabia was "considering additional measures" against Canada, without elaborating.

Experts have said the Saudi move illustrates how the oil-rich kingdom is increasingly seeking to use its economic and diplomatic muscle to quell foreign criticism under its young de facto leader, Crown Prince Mohammed bin Salman.

In Canada, there was disappointment that major Western powers including the United States -- a key ally of Saudi Arabia -- have not publicly come out in support of Canada, though it is not the first country to be targeted for speaking up.

In March 2015, Saudi Arabia recalled its ambassador from Stockholm over criticism by the Swedish foreign minister of Riyadh's human rights record.

Earlier this year, Bloomberg News reported that Saudi Arabia was scaling back its dealings with some German companies amid a diplomatic spat with Berlin.

The move came after Germany's foreign minister last November remarked that Lebanon was a "pawn" of Saudi Arabia after the surprise resignation of its Prime Minister Saad Hariri while in Riyadh.

(Except for the headline, this story has not been edited by NDTV staff and is published from a syndicated feed.)
Comments
Justin Trudeau SaudiHuman Rights Saudi Canada