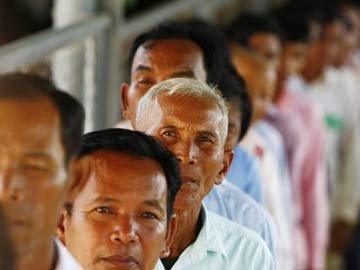 Cambodians line up at a court entrance before a hearing to prepare for the genocide trial of two surviving leaders Khieu Samphan and Noun Chea, at the UN-backed war crimes tribunal in Phnom Penh, Cambodia.

Phnom Penh, Cambodia: Haunted for decades by the death of 46 relatives under the Khmer Rouge, Ung Simonavy is hoping to find some solace this week when Cambodia's UN-backed court delivers verdicts on two former regime leaders for the first time.

"Brother Number Two" Nuon Chea and former head of state Khieu Samphan the most senior surviving ex-Khmer Rouge officials will on Thursday discover their fate for the roles they played in the brutal communist regime.

In April 1975, two million Cambodians were forced from their homes in the capital Phnom Penh and into rural work camps as part of a plan to forge an agrarian utopia. Among them was Ung Simonavy.

While she survived nearly four years of hard labour in paddy fields, most of her family members were executed or starved to death.

"They (Khmer Rouge soldiers) beat my aunt to death with tree branches right in front of me, my grandparents died from starvation," the 53-year-old told AFP, tears rolling down her face.

Like many who survived the "Killing Fields" era, she is looking for some long-delayed justice from Thursday's verdict and possible sentences.

Nuon Chea, 88, and Khieu Samphan, 83, are accused of playing key roles in the communist regime's 1975-1979 rule during which up to two million people nearly a quarter of the population died.

Prosecutors are seeking life imprisonment for the pair, but during a two-year trial which ended last year the defendants insisted they were unaware of the crimes committed under their rule.

Their denial is given short-shrift by many of the survivors of the regime.

"How could they say they did not know about the crimes?" said Ung Simonavy.

"We have waited for justice for so long.They must live in jail until they die."

The complex case against the former leaders has been split into a series of smaller trials, initially focusing on the forced evacuation of people into labour camps and related crimes against humanity.

Poch Sophorn was 12 when armed Khmer Rouge soldiers entered his home outside the capital and ordered his family to leave.

"I ate rats, cats, frogs, lizards, cockroaches.We ate everything we could to survive," he said of his time in the labour camp he was relocated to.

Poch Sophorn, who lost five family members including his father under the regime, is one of 900 Cambodians expected to watch the verdict in court with millions more tuning into live TV and radio broadcasts.

"This is the first time anyone who held a position in the national leadership of the Khmer Rouge will be judged by a court of law," court spokesman Lars Olsen told AFP.

The trial has also been billed as a chance for reconciliation and key to hopes for justice after more than 35 years.

"It helps to establish for Cambodians that there is not always impunity for crimes committed by those in power," Heather Ryan, a trial monitor at the Open Society Justice Initiative, said.

Many observers and victims fear that the ageing Khmer Rouge leaders may not survive to serve any jail time if they are found guilty.

Last week, Nuon Chea and Khieu Samphan began their second trial at the court on charges including genocide of Vietnamese people and ethnic Muslims, forced marriages and rape.

However there are doubts whether they will make it to trial. The court, set up in 2006, has been hit by a series of delays caused by money shortages, staff walkouts and alleged political interference.

Promoted
Listen to the latest songs, only on JioSaavn.com
Led by "Brother Number One" Pol Pot, who died in 1998, the Khmer Rouge dismantled modern society with regime atrocities affecting virtually every family in Cambodia.

In its historic first trial, the court in 2010 sentenced former prison chief Kaing Guek Eav, better known as Duch, to 30 years in prison later increased to life on appeal for overseeing the deaths of 15,000 people.