Tony suffered near-fatal abuse from his birth parents when he was a baby that resulted in the amputation of his legs. 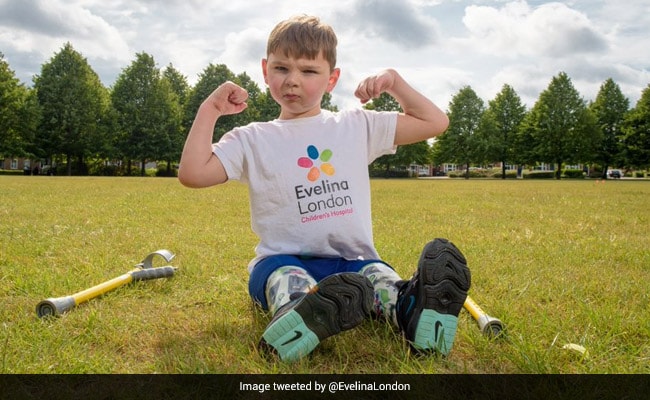 Five-year-old Tony Hudgell has raised more than 1 million pounds ($1.24 million) for the London hospital that saved his life by walking 10 km on his new prosthetic legs after being inspired by Captain Tom's record-breaking challenge.

Tony suffered near-fatal abuse from his birth parents when he was a baby that resulted in the amputation of his legs.

His adoptive mother Paula Hudgell said he received a set of new limbs in February, and from walking barely a step a month ago he could now power through hundreds of metres every day.

The challenge had been "really fun", Tony said, and although hard to begin with, it had got easier day by day. He said he felt "really good" to have achieved his goal of walking 10 km (6.2 miles) in June with days to spare.

Hudgell said Tony was fighting for his life when she first met him in Evelina London Children's Hospital when he was four months old.

"He'd had all his limbs broken, he'd had blood trauma to the face, sepsis, multi-organ failure, and they never expected him to survive," she said at the family's home in Kent, southeast England. "We took him home (...) he was broken, shutdown, a tiny, tiny underweight little boy."

Hudgell and her husband adopted Tony in 2016. "We didn't want him to go anywhere else, he was our little boy by then," she said.

Consultant Michail Kokkinakis said Tony's determination and the support of his family had helped him cope with multiple operations.

"He's a huge inspiration to us all."

His initial target of 500 pounds had now passed an "absolutely incredible" 1 million, his mum said.

She said Tony's was now fast and confident on his new legs. "(It) is incredible to think just three and half weeks ago he could barely take a few steps."

Deciding on his next challenge was a "hard question" Tony said, but longer term he is set on becoming a policeman. "I want to handcuff bad people and robbers," he said.