The college visit was to allow the Duke of Sussex to meet young women whose education is partially supported by The Queen's Commonwealth Trust, of which Prince Harry and Meghan Markle are president and vice president respectively. 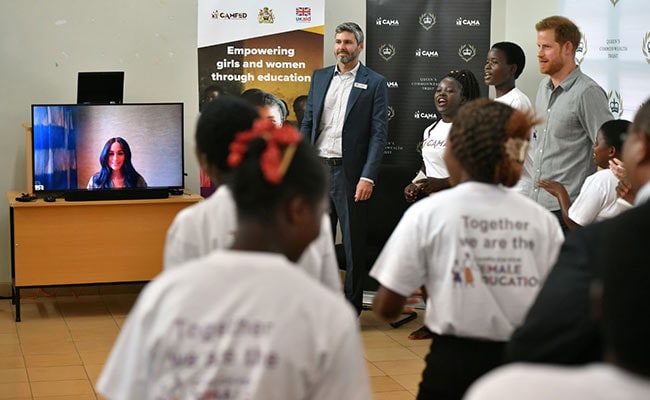 A post on the couple's official Instagram said the project was changing the lives of many young women.

Britain's Prince Harry began his first official visit to Malawi on Sunday, with wife Meghan joining him on a college visit via video call after she had met a group of female activists in Cape Town the previous day.

The Duke of Sussex had left the duchess and their four-month-old son Archie - who stole the spotlight when he sat on his mother's lap while his parents chatted with Nobel Peace Prize laureate Desmond Tutu in Cape Town - to visit Botswana, Angola and Malawi.

Though Harry has visited Malawi several times privately, this trip is his first visit in an official capacity, marking the final leg of his solo tour across southern Africa before rejoining his family in Johannesburg.

The college visit was to allow the Duke of Sussex to meet young women whose education is partially supported by The Queen's Commonwealth Trust (QCT), of which Harry and Meghan are president and vice president respectively.

Harry was greeted by a line of students waving UK and Malawi flags before entering the college, where Meghan joined proceedings via Skype while, she said, Archie took a nap.

A post on the couple's official Instagram said the project was changing the lives of many young women.

"As president and vice president of the QCT, the Duke and Duchess both believe in the power of education to empower young girls, and change society as a whole," the post said.

Harry will next see President Peter Mutharika, who he has met on a number of occasions, and attend a reception hosted by the British High Commissioner.

Queen Elizabeth's grandson and sixth in line to the throne has been visiting southern Africa for two decades for holidays and conservation work, but this is his the first official overseas tour with both Meghan and their son.

The family drew crowds of well-wishers in Cape Town, where Meghan visited a post office where a female student was murdered last month in one of a spate of killings and rapes that have sparked outrage over high levels of gender-based violence in the country.

It was announced on Sunday that Meghan, known for being an advocate for women's rights, had met a group of female leaders and activists the previous day. The women included Sophia Williams-De Bruyn, who in 1956 led 20,000 women in an anti-apartheid march on the the seat of government in Pretoria when she was only 18 years old.

"I was recently reminded that the first one up the mountain often gets knocked down the hardest but makes way for everyone behind them," a statement quoted Meghan as saying to the women, adding that all young female campaigners must keep at it.

Gender-based violence, she said, was a global problem and the solution had to come from everybody, regardless of factors such as race, gender or politics.

The next day he will visit a health centre, pharmacy and youth reproductive health outreach programme before rejoining his family in South Africa for another township visit, this time in Johannesburg.