Brain control in a flash of light 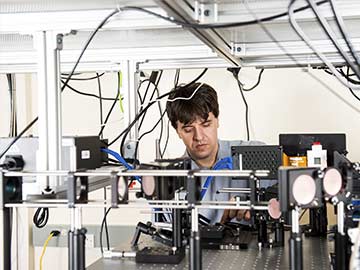 Dr. Karl Deisseroth with an array of optical elements and lasers in a lab at Stanford School of Medicine, in Palo Alto, California, April 2, 2014.

San Diego: Karl Deisseroth is having a very early breakfast before the day gets going at the annual meeting of the Society for Neuroscience. Thirty thousand people who study the brain are here at the Convention Center, a small city's worth of badge-wearing, networking, lecture-attending scientists.

For Deisseroth, though, this crowd is a bit like the gang at Cheers - everybody knows his name. He is a Stanford psychiatrist and a neuroscientist, and one of the people most responsible for the development of optogenetics, a technique that allows researchers to turn brain cells on and off with a combination of genetic manipulation and pulses of light.

He is also one of the developers of a new way to turn brains transparent, though he was away when some new twists on the technique were presented by his lab a day or two earlier.

"I had to fly home to take care of the kids," he explained. He went home to Palo Alto to be with his four children, while his wife, Michelle Monje, a neurologist at Stanford, flew to the conference for a presentation from her lab. Now she was home and, here he was, back at the conference, looking a bit weary, eating eggs, sunny side up, and talking about the development of new technologies in science.

A year ago, President Barack Obama announced an initiative to invest in new research to map brain activity, allocating $100 million for the first year. The money is a drop in the bucket compared with the $4.5 billion the National Institutes of Health spends annually on neuroscience, but it is intended to push the development of new techniques to investigate the brain and map its pathways, starting with the brains of small creatures like flies.

Cori Bargmann of Rockefeller University, who is a leader of a committee at the National Institutes of Health setting priorities for its piece of the brain initiative, said optogenetics was a great example of how technology could foster scientific progress.

"Optogenetics is the most revolutionary thing that has happened in neuroscience in the past couple of decades," she said. "It is one of the advances that made it seem this is the right time to do a brain initiative."

Deisseroth, 42, who has won numerous prizes and received plenty of news media attention for his work on optogenetics, is quick to point out that there is no sole inventor for this technology.

"It's not as if one person had a eureka moment," he said. "The time had come, and it was a question of who had put the resources and effort and people" on the task, and who would get there first. But it was he and his colleagues, Edward Boyden and Feng Zhang, who took those previous discoveries and devised a practical way to turn neurons on and off with light.

Ehud Isacoff, of the University of California, Berkeley, who recently wrote about the development of the technique, said Deisseroth "was incredibly important in getting all the parts to come together."

The reason optogenetics has transformed neuroscience is that it allows scientists to go beyond observation. In neuroscience, as in all science, it is crucial to be able to make and test predictions.

"You want to be able to play the piano," said Bargmann, paraphrasing Rafael Yuste, a Columbia University neuroscientist and one of the people who proposed creating a brain activity map. The tools of optogenetics are allowing scientists to perform the neuroscientific equivalent of "Chopsticks" in the brains of laboratory animals - to find and control, for example, neurons that control a kind of aggression in fruit flies.

The hope is that scientists can work their way up to the level of Chopin - and that this tool and others like it will uncover deep mechanisms of brain function that hold true not only for flies and mice, but for the ultimate neuroscientific puzzle, the human brain.

Karl Deisseroth was not always headed for a career in the laboratory, although his father, an oncologist, and his mother, who trained as a chemist, both exposed him to the world of science. "My first love was writing," he said.

That was still the case in his first years at Harvard, when he took courses in creative writing and seriously considered pursuing a literary life. Eventually, however, interest in science took over. He majored in biochemistry and went on to Stanford for a medical degree and a Ph.D., expecting to become a neurosurgeon. In interviews at the San Diego meeting, and earlier at his Stanford lab, he explained what changed him.

Brain surgery "was the first clinical rotation I did; I was that certain that was what I wanted to do," he said. But his next stop was psychiatry. "It was a completely transformative thing," he said.

It was eye-opening, he said, "to sit and talk to a person whose reality is different from yours" - to be face to face with the effects of bipolar disorder, "exuberance, charisma, love of life, and yet, how destructive"; of depression, "crushing - it can't be reasoned with"; of an eating disorder literally killing a young, intelligent person, "as if there's a conceptual cancer in the brain."

He saw patient after patient suffering terribly, with no cure in sight. "It was not as if we had the right tools or the right understanding." But, he said, that such tools were desperately needed made it more interesting to him as a specialty. He stayed with psychiatry, but adjusted his research course, getting in on the ground floor in a new bioengineering department at Stanford. He is now a professor of both bioengineering and psychiatry.

With his own lab, in concert with other researchers, he began to pursue

two projects. The one for which he was hired was low risk, involving stem cells and methods to enhance the growth of neurons. The second was the possibility of using light to control brain cells.

That was high risk, but not because it was an unknown idea; quite the opposite. Despite many barriers to success, it was a crowded field.

At the heart of all optogenetics are proteins called opsins. They are found in human eyes, in microbes and other organisms. When light shines on an opsin, it absorbs a photon and changes.

When he came into the field, Deisseroth said, "Microbial opsins had been studied since the '70s." Thousands of papers had been published. So the basics of the chemicals were well known.

"People talked and thought about the possibility of putting them into neurons as a control tool, and everybody thought that it might work but it would be unlikely to be very effective, unlikely to work very well, because these opsins come from organisms that are very distant and separated from mammals evolutionarily," he said.

The genes to make the opsins needed to be inserted into the neurons, and several more steps were necessary so the system would work.

By the early 2000s there had also been an improvement in engineering viruses that were effective in smuggling the opsin genes into nerve cells, but caused no harm. Research intensified.

"There were, to my knowledge, maybe six or seven people actually trying" to get this idea of light control of neurons to work, he said.

In 2005, Deisseroth; Boyden and Zhang, both of whom now have their own labs at MIT; and Ernst Bamberg, of the Max Planck Institute of Biophysics and Georg Nagel at the University of Wurzburg published a paper showing that an opsin called channelrhodopsin-2 could be used to turn on mammalian neurons with blue light.

This was the breakthrough research, but it had antecedents. A 2002 paper by Gero Miesenbock at Oxford established proof that optogenetics could work. He used opsins from the fruit fly to turn on mouse neurons that had been cultured in the lab.

Isacoff reviewed the development of optogenetics recently after the awarding of the 2013 European Brain Prize to six people, including Deisseroth and Boyden, for work on optogenetics. The other winners were Bamberg, Nagel, Miesenbock and Peter Hegemann at Humboldt University in Berlin. He wrote of Miesenbock's work, "If one had to identify the paper that launched the thousand ships of optogenetics, this is it."

But although this was a breakthrough and a proof that light could be used to control neurons, Miesenbock's work was not picked up as a tool by the neuroscience community because, Isacoff wrote, of the limited effectiveness of light in stimulating the neurons, and because it was hard to adapt to different biological systems.

Deisseroth's group, said Isacoff, turned instead to microbial opsins, building on the work of Bamberg, Nagel and Hegemann. They figured out how to get one of these opsins safely into mammalian neurons so that the neurons would respond strongly to light. That made all the difference.

"The methods that are widely used now are the ones that Karl developed," Bargmann said. "He flipped the switch that made them practical."

Shortly thereafter the lab of Stefan Herlitze of Ruhr University Bochum, in Germany, collaborating with Hegemann and Lynn Landmesser of Case Western Reserve University, reported a similar finding. Deisseroth pointed out, however, that the initial paper was just the beginning. It involved only cells in culture. Many questions remained. "How are you going to get the light deep into the brain?" he said. "How are you going to target these genes? Will it control behavior? Will you be able to turn on or off behaviors?"

Those questions have now been answered through a great deal of work in Deisseroth's lab and in others'. Hundreds of papers have been published. Many researchers are using and developing techniques, which, Isacoff wrote, "have been used to study brain waves, sleep, memory, hunger, addiction, aggression, courtship, sensory modalities, and motor behavior."

In 2013, while continuing the work on developing optogenetic techniques, the Deisseroth lab produced another technique that Deisseroth has high hopes for. He and Kwanghun Chung, now an assistant professor at MIT with his own lab, managed to turn whole mouse brains transparent, with a method called Clarity.

This is not a technique for living brains. They infused mouse brain tissue with a hydrogel, a substance well known to chemists but not one previously used in neuroscience. The method leaves the brain tissue not only transparent, but also still available for biochemical tests.

The lab is working on making a whole preserved human brain transparent; it was a presentation on this work that Deisseroth had missed during his shuttle parenting in San Diego.

The long-term goal of his work continues to be to find a way to help people with severe mental illness or brain diseases, and he has recently proposed ways that optogenetics, Clarity and other techniques may be turned to this aim.

He still treats patients. "I don't think a day goes by that I'm not looking at results and thinking how to apply them clinically," he said.

Optogenetics is a crucial tool in understanding function. Clarity, on the other hand, is an aid to anatomical studies, basic mapping of structure, which, he says, is as important to understand as activity.

"I've administered electroconvulsive therapy - I know we can administer this therapy and cause a general seizure," he says, in which the activity of the whole brain is disrupted.

"Within a few minutes, the whole person comes back. Where does it come back from? From the structure," he said.
© 2014, The New York Times News Service
Comments
Karl DeisserothNeurosciencebrain control