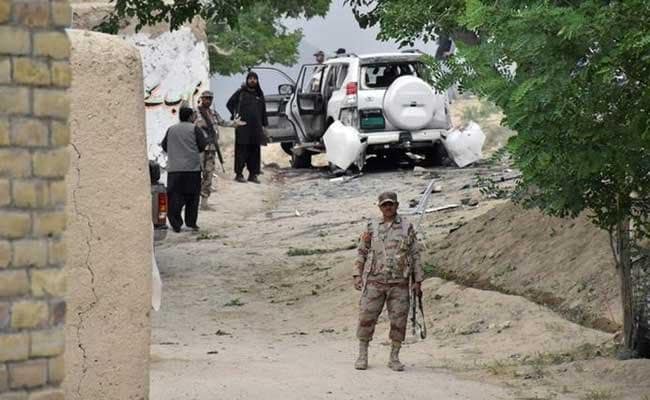 Quetta: A bomb exploded next to a convoy of the deputy chairman of the Pakistan Senate on Friday in the violence-plagued province of Balochistan, killing at least 25 people, officials said.

At least 35 people were wounded in the blast near the town of Mastung, 50 km (30 miles) from the provincial capital of Quetta. Television footage showed a vehicle mangled by the blast.

Senator Abdul Ghafoor Haideri, the deputy chairman of the upper house of parliament, told Reuters minutes after the explosion he believed he was the target and he had sustained minor injuries.

"There are many casualties as there were many people in the convoy," he said by telephone.

There was no immediate claim of responsibility for the attack from the many terrorists groups operating in Balochistan.

District health official Sher Ahmed Satakzai said the death toll had risen to 25 and 10 were in critical condition in hospital.

Security in Pakistan has improved since a crackdown on terrorism began in 2014, but a fresh wave of attacks that left more than 100 people dead in February has increased pressure on Sharif's government.

Mastung police official Ghazanfar Ali Shah said the convoy appeared to have been hit by a suicide bomber, adding Haideri's driver was among those killed.

The senator, who is being treated in hospital, was on his way back to Quetta after distributing graduation certificates to students who had graduated from a madrassa, or religious academy.

Separatist terrorists in Balochistan have waged a campaign against the central government for decades, demanding a greater share of the gas-rich province's resources.

Taliban and other terrorists also operate in the province, which shares borders with Afghanistan and Iran. A US drone strike killed Taliban leader Mullah Akhtar Mansour last year in Balochistan.

The province was rocked by a series of attacks late last year that claimed over 180 lives and raised concerns about a growing terrorist presence.

Promoted
Listen to the latest songs, only on JioSaavn.com
A judicial report released after an attack on the province's lawyers left more than 70 dead criticised security provisions in the region and called for increased clampdowns on extremists.