Clashes erupted for a second night after video circulated showing 29-year-old Jacob Blake being shot and wounded in the back multiple times by police Sunday with his three children watching. 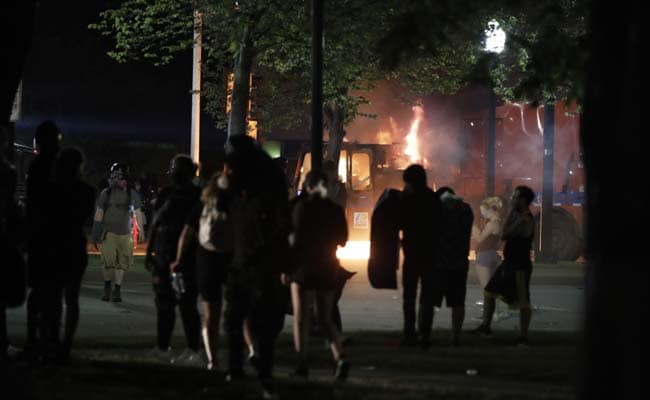 Protestors walk by a truck set on fire during demonstrations against the shooting of Jacob Blake.

Police fired tear gas on Monday when a protest demanding racial justice in the city of Kenosha in Wisconsin turned violent, as rage builds once more in the US at the shooting of a black man by a white officer.

Clashes erupted for a second night after video circulated showing 29-year-old Jacob Blake being shot and wounded in the back multiple times by police Sunday with his three children watching.

They fired after the demonstrators began throwing water bottles at the Kenosha County Sheriff's officers. Some protesters then launched fireworks and more bottles at officers.

Later, some protesters smashed streetlights and set fire to a nearby building.

The clashes came hours after some two dozen police faced off against hundreds of demonstrators chanting "No justice, no peace" and "Say his name -- Jacob Blake."

Blake, 29, was airlifted to hospital in Milwaukee in serious condition, but local media reported Monday afternoon that his family said he was out of surgery and improving.

Kenosha County, on the shores of Lake Michigan, has declared a curfew from 8:00 pm until 7:00 am Tuesday, after protesters set alight several city vehicles and damaged the county courthouse late Sunday.

"The public needs to be off the streets for their safety," the county sheriff said in a statement.

Wisconsin governor Tony Evers said he was sending 125 members of the national guard to the city to maintain order Monday night.

He urged protesters to be peaceful, adding: "We must see the trauma, fear and exhaustion of being black in our state and our country."

One couple, who only gave their names as Michelle and Kalvin, had brought their seven-year-old daughter and eight-year-old son with them.

"I want my kids to see how change happens and am here so nothing like this ever happens to them," Michelle said.

Another resident, 37-year-old Sherese Lott, called for police to be held accountable.

"If I killed someone I'd be convicted and regarded as a murderer. I think it should be the same for the police," she said.

The footage and the lack of any immediate explanation provoked painful memories of the police killing of African American George Floyd three months ago in Minneapolis, which sparked massive nationwide protests.

Fresh demonstrations were held in the Minnesota city Monday night also to join the calls for justice for Jacob Blake. Some demonstrators were seen burning an American flag.

"I'm angry and I'm upset and I'm tired. I'm really tired. I'm tired of marching 27 miles up and down the city for this," one protester, who gave her name only as Awal, said with tears in her eyes.

Democratic presidential candidate Joe Biden called for a transparent probe into the shooting.

"Yesterday, Jacob Blake was shot seven times in the back by police. His kids watched from the car. Today, we woke to grieve yet again. We need a full and transparent investigation," he said.

Barnes said Blake "was actually trying to de-escalate a situation in his community but the responding officer didn't feel the need to do the same.

Kenosha police pushed back at criticism, and urged the public to wait for the results of an investigation by the Wisconsin Department of Justice.

"As always, the video currently circulating does not capture all the intricacies of a highly dynamic incident," said Pete Deates, president of the Kenosha Professional Police Association.

The officers involved in the incident were placed on administrative leave, according to the justice department.

Civil rights attorney Benjamin Crump, who represents the families of Floyd and other black victims of police violence, said Blake had been trying to break up a fight between two women.

"We will seek justice for Jacob Blake and for his family as we demand answers from the Kenosha Police Department," Crump said in a statement.