Bear breaks Into Home, Then Forcibly Escapes Like The "Kool-Aid Man"

Bears have grown accustomed to breaking into cars to steal food, the police statement said. 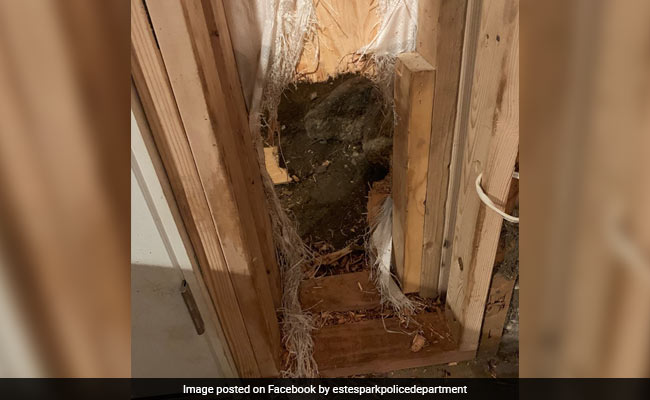 The bear entered a home in Estes Park after it found the scent of trash in the area.

The thieves cased the area around the McGregor Mountain foothills, on the hunt for vehicles with unlocked doors - which helps you open them if you don't have opposable thumbs and you are also a bear.

Local black bears in northern Colorado have channeled fictitious velociraptors, opening car doors to swipe food so often that they break into vehicles without smelling food just to see if they get lucky.

On Saturday, one bear tried its luck in a home in Estes Park, attracted to the scent of trash in the area, the town's police department said in a statement. After the bear got into the house, officers were dispatched to respond.

The bear was not having that. It turned tail and ran when officers arrived, paying no mind to a wall blocking its way. The bear "forcibly breached a hole in the wall like the 'Kool-Aid Man,' and made its escape," the department said on Facebook.

The department was referring to Kool-Aid man, the anthropomorphic drink mascot that destroys brick walls as it shouts "Ohhh yeah!" - never seeming to baffle or terrify children and, in at least one commercial, helps authorities stop bank robbers.

Estes Park police referred questions to Colorado Parks and Wildlife, which did not return a request for comment. But the police statement included information from the agency, which described the intricate and escalating ways in which bears have sought food in the area.

Bears have grown accustomed to breaking into cars to steal food, the statement said. But they have even gone into cars that had "nor even a crumb," the agency said.

"This shows that some individual bears are so habituated to receiving food from vehicles that some are going car to car seeing if they are unlocked, even if they don't see or smell food," the agency said.

Bears are so good at breaking into things that six grizzlies outside Yellowstone National Park became professional product testers, mauling containers to evaluate if they can be certified "bear resistant."

The area has seen recent bear-related home invasions and high-profile car break-ins. In 2017, a bear to the southwest in Vail opened a kitchen window, wandered around the house and stomped its paws on a piano. The performance was not great.

A year before, in Jefferson County to the southeast, a bear wandered into a Subaru, somehow closed the doors and locked itself in, prompting sheriff's deputies to very carefully approach a door and let the beast out.

"Thankfully once the door was open the bear had no interest in deputies, only in getting back into the wild," the department said then.

(Except for the headline, this story has not been edited by NDTV staff and is published from a syndicated feed.)
Comments
black bear

Google To Allow Some Coronavirus Ads, Starting With Hospitals