"Be Careful What You Wish For": Joe Biden Teases 2020 Presidential Bid

Former Vice President Joe Biden teased a possible bid for the 2020 Democratic presidential nomination, telling a friendly crowd of union members he may need their support "in a few weeks." 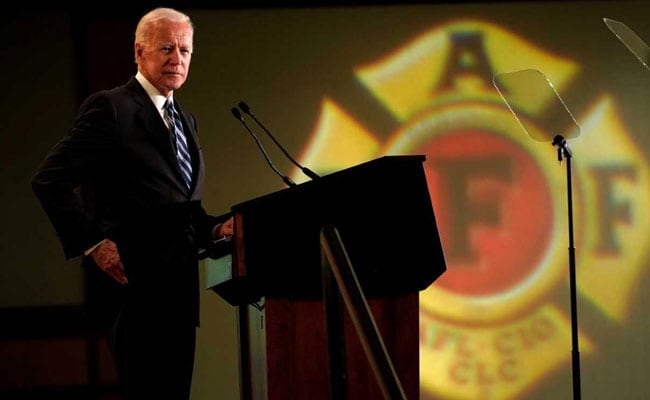 Joe Biden would join a sprawling field that already includes more than a dozen candidates.

Former Vice President Joe Biden teased a possible bid for the 2020 Democratic presidential nomination on Tuesday, telling a friendly crowd of union members he may need their support "in a few weeks."

"Be careful what you wish for," Biden joked to a gathering of the International Association of Firefighters (IAFF) in Washington, as a room of boisterous firefighters shouted, "Run, Joe, run!"

Biden, a 76-year-old former U.S. senator from Delaware who served two four-year terms as vice president to President Barack Obama, has publicly said he is weighing a run as the party's elder statesman and is in the final stages of making a decision.

The IAFF has been an ardent political ally of Biden's for years, and an endorsement by the union would likely give him an early boost should he enter the race for his labor-friendly party's nomination.

IAFF President Harold Schaitberger said he told Biden before the event that he would have the union's full support should he run.

"He told me that he's getting ready to make an important decision, and I made sure he knew that when he's ready to pull the trigger, so are we," Schaitberger said.

Biden would join a sprawling field that already includes more than a dozen candidates.

Two other Democratic Party luminaries, former Georgia gubernatorial candidate Stacey Abrams and former U.S. Representative Beto O'Rourke, have said they are considering running as well. O'Rourke will make a trip to the early voting state of Iowa this weekend.

The entrance of Biden, Abrams or O'Rourke could reshape the race. Opinion polls have consistently shown Biden to be a top choice among Democrats, along with U.S. Senator Bernie Sanders of Vermont.

Biden largely avoided criticizing Republican President Donald Trump in his remarks to the firefighters union, but he did take a shot at the federal budget outline released on Monday by the White House.

The budget plan, which is unlikely to be approved by Congress in any form, calls for steep cuts in the Medicare and Medicaid healthcare financing programs.

Biden assailed the cuts as a means to pay for the sweeping tax reform bill passed by Congress in 2017 that slashed the corporate tax rate but increased the federal budget deficit.

"Who are they asking to pay for it? Middle-class families like you," Biden said.

Biden also lamented the state of American politics. He was slammed in some party circles for praising a Republican congressman, Fred Upton, at an event last year.

"Mean pettiness has overtaken our politics," Biden said. "I get criticized for saying anything nice about a Republican. Folks, that's not who we are."