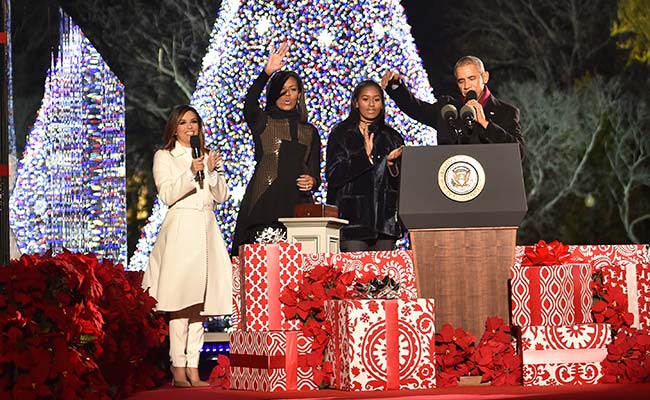 WASHINGTON: President Barack Obama on Thursday marked his final time lighting the National Christmas Tree with a wish that Americans will care for the sick, the hungry and the downtrodden this holiday season and treat one another as they would want to be treated.

The president said that message rounds out his family's Christian faith, and that of Americans of all backgrounds.

Obama reflected on his eight years in office and said the United States is a country that has come back from economic crisis, wars and national tragedies.

"What I've seen is a big-hearted and hopeful and resilient people who look out for each other," Obama said.

The lighting ceremony tradition began in 1923 and takes place in President's Park, just south of the White House fence. Obama and first lady Michelle Obama turned on the red, white and blue lights that adorned the massive tree, with help from their daughter Sasha.

Promoted
Listen to the latest songs, only on JioSaavn.com
Performers at this year's ceremony included Garth Brooks and Trisha Yearwood, Kelly Clarkson, Marc Anthony, Yolanda Adams, The Lumineers, James Taylor and Chance the Rapper. The host was actress Eva Longoria.