At UN, India Raises Questions About Source Of Terror Funding

With Afghanistan reeling from terror attacks targeting hospitals, schools, funerals, international development agencies and diplomatic missions in recent months, Syed Akbaruddin said such attacks "seem to be aimed at sending a message to a nation trying to stand on its feet." 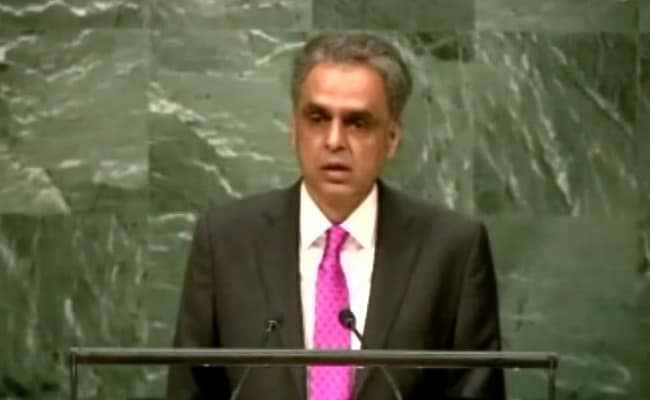 Syed Akbaruddin questioned where are these anti-government elements were getting their weapons.

United Nations: India has asked the UN member states to find the source from where the "anti-government elements" in Afghanistan were getting weapons, training and funds to fight one of the biggest collective military forces in the world.

"We see a growing tendency of treating violence in Afghanistan as a routine occurrence. Brutalities by terrorist and criminal networks are ignored under the label of anti-government elements or a consequence of a civil and political conflict. In doing so, we appear to be failing in asking some crucial questions," India's Permanent Representative to the UN Ambassador Syed Akbaruddin said yesterday.

Mincing no words, Mr Akbaruddin, speaking at a Security Council debate on Afghanistan, questioned where are these anti-government elements were getting their weapons, explosives, training and funding from.

Mr Akbaruddin's remarks appeared to be a veiled reference to Pakistan, which is accused by both India and Afghanistan of supporting, training and funding terrorist groups.

He also asserted that the international community should not differentiate between good and bad terrorists, as he admonished attempts to play one group against the other.

"The Taliban, Haqqani Network, Al-Qaeda, Daesh, Lashkar- e-Toiba, Jaish-e-Mohammad and others of their ilk are all terror organisations, many of them proscribed by the UN. They should be treated like terrorist organisations with no justifications offered for their activities," he said.

With Afghanistan reeling from terror attacks targeting hospitals, schools, funerals, international development agencies and diplomatic missions in recent months, Mr Akbaruddin said such attacks "seem to be aimed at sending a message to a nation trying to stand on its feet."

Mr Akbaruddin lamented that the recent multiple crises inflicted on the war-torn country have again made Afghan territory attractive for criminal and terrorist groups, which seem well connected to international terror and crime networks that prey themselves on the resources of Afghanistan.

"This situation affects the security in South and Central Asian regions and beyond," he said. "The international community's collective inability and unwillingness to see the problem for what it is has inflicted huge costs on the people of Afghanistan."

He also criticised the Security Council for at times even shying away from condemning some of the terrorist attacks in Afghanistan. "Is it that they are far too many to keep track of? Is it because there is a threshold below which human lives lost to terrorism are not required to be addressed," he added.
Comments
terrorismSyed AkbaruddinAfghanistan