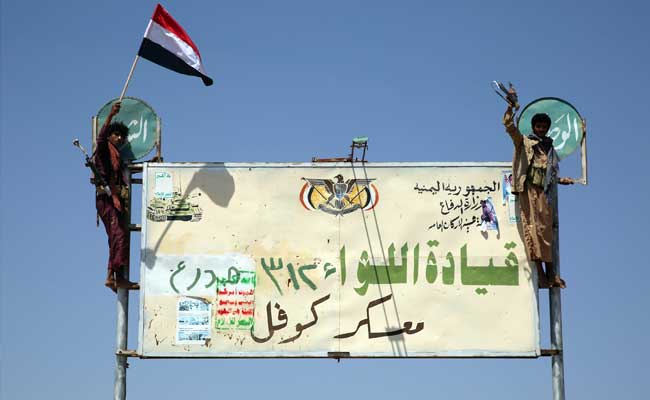 Dubai, UAE: An unprecedented attack on Yemen's government claimed by the Islamic State terrorist group has raised a fresh challenge for the Saudi-led coalition backing the embattled president, analysts say.

IS bombings on Tuesday hit the government's temporary headquarters in the southern city of Aden and military installations used by the coalition which is fighting Shiite Huthi rebels, killing more than 15 people.

The IS, which controls swathes of Syria and northern Iraq, has previously carried out several deadly attacks and suicide bombings against the Huthis.

But it had not targeted forces loyal to President Abedrabbo Mansour Hadi or Gulf troops deployed in Yemen as part of the coalition.

Saudi Arabia and the United Arab Emirates, which have contributed the bulk of forces to the campaign against the rebels, also both belong to a US-led coalition bombing IS in Syria and Iraq.

"Daesh is trying to expand its space in Yemen by apparently posing as an opponent of the coalition," said Jean-Pierre Filiu, an expert on contemporary Islam, using the Arabic acronym for IS.

The spectacular attacks by IS allow its militants to "differentiate themselves once again from Al-Qaeda in the Arabian Peninsula", following its deadly bombings of Shiite mosques in Sanaa, said Filiu, a professor at the School of International Affairs in Paris.

The Soufan Group intelligence consultancy based in New York has said: "The ongoing war in Yemen has been a disaster for almost everyone involved, except the Islamic State.

"The war in Yemen is a perfect laboratory for a terror group seeking regional expansion like the Islamic State."

Experts agree that the IS attacks further complicate the task facing the coalition, which despite seven months of air strikes and the deployment of thousands of troops on the ground has not managed to break the back of the rebels.

The Huthi rebels and allied troops loyal to former president Ali Abdullah Saleh remain in control of northern Yemen and the capital Sanaa, which they overran in September 2014.

The attacks are "likely to spark some debate within the coalition about the direction of policy," said Jane Kinninmont, deputy head of the Middle East programme at London's Chatham House think-tank.

They will also "place more emphasis on the need not just to confront the Huthi-Saleh alliance but to rebuild the Yemeni state", said Kinninmont, cautioning this was "easier said than done".

Although IS is "new to Yemen," the conflict and the worsening humanitarian situation "create fertile ground for radicalisation", she said.

The UAE, which lost four soldiers in Tuesday's attacks, blamed them on the Huthis and their allies, without any reference to IS.

"In reality, these attacks were launched by tribal elements of IS, with old connections to the camp of Saleh," according to Mathieu Guidere, a professor and Middle East specialist at the University of Toulouse in France.

His theory is that Saleh has "reactivated his old connections with those elements to divert the efforts of the coalition towards fighting terrorism".

"If the Saudis fall into this trap and change their priorities by targeting IS, the camp of Saleh and Huthis would win some respite."

"Saudi Arabia's lack of clear goals in Yemen is worsening the security vacuum and potentially undermining the kingdom's national security," he said.

The coalition launched its air war in late March as the rebels advanced on Aden, where Hadi had taken refuge after escaping house arrest in Sanaa.

He fled that month to Riyadh and returned to Aden in September after loyalists backed by coalition forces retook the port city and four other southern provinces.

The United Nations says around 5,000 people have been killed and 25,000 wounded, many of them civilians, in Yemen's conflict since March.