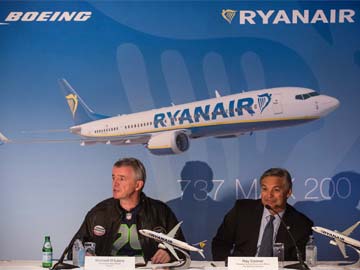 New York: Irish budget airline Ryanair agreed to buy 100 aircraft from Boeing for $11 billion, with an option to purchase another 100 planes from the aerospace giant, the companies announced on Monday.

The order covers the 737 Boeing MAX 200, which Boeing touts as a fuel-efficient vehicle for the important single-aisle civilian market. The planes will accomodate up to 200 seats, up from the 160 in other single-aisle planes.

Ryanair said the giant order will enable it to meet its growth targets, which calls for it to expand from 82 million customers in 2014 to more than 150 million in 2024, which marks the end of the delivery stream of the planes under Monday's order.

Promoted
Listen to the latest songs, only on JioSaavn.com
O'Leary said Ryanair plans to use the jets to enter new markets in Europe and challenge incumbent carriers.

"I hope it will hasten a new era of price wars in Europe over the next 10 years," he said.