It was a dream experience for Hudson until the return flight home via American Airlines, for which point Hudson's mother says he and eight other unaccompanied minors from the camp were temporarily stranded. 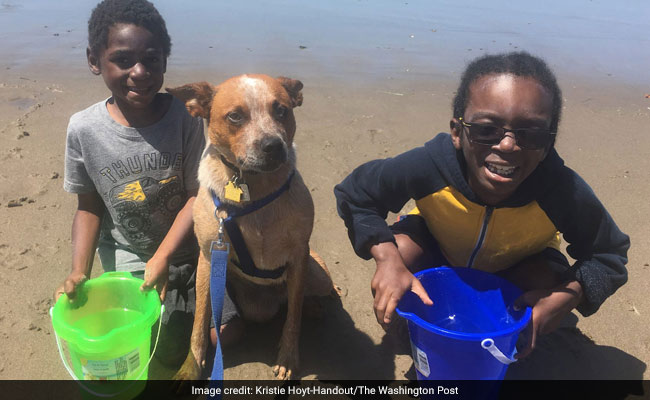 "I felt scared," Hudson, who suffers from anxiety, said in an interview.

Hudson Hoyt was ecstatic for his first time at Camp New Friends.

The 8-year-old, who lives in Beaverton, Oregon, flew east in early August for the camp's week-long summer program outside of Charlottesville, Virginia, specifically for children with neurofibromatosis, a genetic disorder that causes tumors to grow on nerve tissue.

It was a dream experience for Hudson - at least, until the return flight home via American Airlines, for which point Hudson's mother says he and eight other unaccompanied minors from the camp were temporarily stranded, deprived of food and met with conditions so poor it's made her son reluctant to fly again.

"I felt scared," Hudson, who suffers from anxiety, said in an interview with The Washington Post. "When the plane stopped moving, I was afraid I was never going to see my mom again."

The first plane arrived late for a layover in Charlotte, North Carolina, according to Hudson's mother, Kristie Hoyt, and the children were rushed to their Portland, Oregon, flight without stopping for food. But then the second plane was stalled by delays that were not communicated to the parents. First, fuel spilled on the tarmac. Then, she learned that the airline needed to find replacements for the pilot and co-pilot, who had worked too many hours.

When Hoyt asked for a direct phone number for someone with American Airlines who could keep her updated on the children's situation, the mother says she was denied. Updates came after a 12-year-old in the group called her and gave the phone to a flight attendant. The airline never reached out to her directly, she says, even though she was listed as the contact for two children on the trip.

With their flight delayed until the next morning, the children's' problems worsened at the Charlotte airport. They stayed overnight in an unaccompanied-minor room, where some of the kids had to sleep on the floor because there were not enough beds and furniture, Hoyt said. Hudson and his friends still hadn't eaten a full meal since breakfast at camp that morning, and the vending machines inside didn't work.

Some of the children on the flight required medication with a full meal to prevent seizures and migraines, she says.

"American Airlines, how are you okay with leaving 9 unaccompanied children all with medical needs on a plane for over 5 hours and not giving their parents updates?" she wrote Friday night. "Or allowing the kids access to electricity to charge their phones to talk to their parents? You are disgraceful! And harming these children!"

After their overnight stay at the airport, Hoyt says the children were rushed onto a plane at about 6 a.m. EDT. The children did not receive breakfast aboard the plane as promised, she said, even when the takeoff time was delayed again because "the catering service wasn't delivered." The confusion came to a head when the kids arrived in Portland and the mother was asked to sign for a child who was not hers.

In all, Hoyt said the children went more than 24 hours without a full meal. In a 5 a.m. text from her son, which she later posted to Facebook, Hudson wrote: "[Our] plane has not take off yet I [have] not had lunch dinner or breakfast."

After his adoption, Hudson has struggled with anxiety and abandonment issues, something his mother says they are working to overcome. She and other parents say they were never contacted by the airline, even though American Airlines' policy requires staffers to "call the contacts on the unaccompanied minor form" in the event of a delay or canceled flight.

Kelley Phillips, identified by KATU as another child on the plane, told the network she and her friends had "limited" access to the bathroom and were only provided with snacks.

"The only thing we had were crackers and soda, which isn't good because we need real food to be able to take our medication," Phillips said.

American Airlines issued a public statement of apology and attributed the overnight delay to a mechanical problem. It said the children were kept "safe and comfortable" in the care of airline personnel. "Our team is in the process of reaching out to the families involved and sincerely apologizes for this travel experience. We will be reviewing with our teams internally to understand how we can do better next time," the airline wrote.

Hudson, she said, wants to go back to camp but now has trepidation about flying. After meeting with a counselor Monday, however, they've narrowed that scope to American Airlines flights, specifically.

"We're just trying to work through the trauma of it," she said.