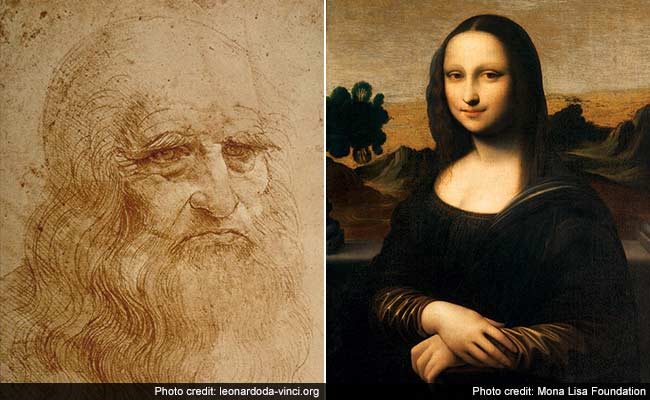 A self portrait of Leonardo da VInci (left) and the famous Mona Lisa.

London: Leonardo da Vinci's painting 'Mona Lisa' may provide proof of the existence of extraterrestrial life, according to a website which claims to have spotted an 'alien' hidden in the famous artwork.

The Paranormal Crucible website claims to have spotted an 'alien high priest' hidden in the painting, while identifying its facial features, a headdress, a cloak and hands.

"Many theologians believe that Leonardo Da Vinci deliberately concealed secret codes and subliminal messages in most of his work," the Paranormal Crucible website said in a video posted online.

"If this is true then it's reasonable to assume that the Mona Lisa was in fact painted in order to conceal important historical and religious facts possibly regarding the extraterrestrial presence and its surreptitious involvement within the Roman Catholic Church," it said.

However, the video admits to enhancing the colours of the painting to make the features more visible, 'mirror.co.uk' reported.

Promoted
Listen to the latest songs, only on JioSaavn.com
Scott C Waring, an alien conspiracy theorist who runs the UFO Sightings Daily website, agrees with the possibility of an 'alien' image lurking in da Vinci's painting.

"He was known for hiding secret messages and codes in his artwork, so this new discovery gives us the key we have been missing about him. His extraordinary abilities came from or were those of aliens," Waring said.