Ahead Of Donald Trump Decision, China Says It Will Stick To Paris Climate Deal

If US President Donald Trump pulls out the United States from the Paris Agreement, it would join Syria and Nicaragua as the world's only non-participants in deal meant to reduce global emissions. 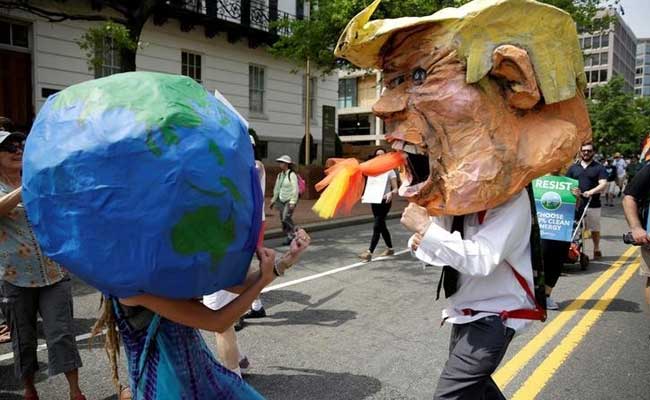 Protesters dressed as Earth and US President Donald Trump pretend to fight in Washington. (Reuters)

Beijing: China said on Thursday it will stick to the Paris climate deal as the world awaited an announcement by U.S. President Donald Trump on whether to keep the United States in the global pact to fight climate change.

During his 2016 presidential campaign, Trump denounced the accord, and called global warming a hoax aimed at weakening U.S. industry. A source close to the matter said Trump was preparing to pull out of the agreement.

A U.S. withdrawal could deepen a rift with its allies. The United States would join Syria and Nicaragua as the world's only non-participants in the landmark 195-nation accord agreed upon in Paris in 2015.

Chinese Foreign Ministry spokeswoman Hua Chunying said the agreement had not been reached easily and it represented the broadest consensus of the international community.

"Climate change is a global challenge. No county can place itself outside of this," she told a daily news briefing.

No matter what changes other countries made in their positions, China would follow its green, sustainable development concept, strengthening measures to deal with climate change and would conscientiously follow the Paris agreement, Hua said.

"At the same time, we will continue to resolutely be a protector and promoter of the global climate system process, proactively participating in the multilateral climate change process," Hua said.

"We are willing to work with all sides to jointly protect the Paris agreement process, promote the actual rules and regulations of the agreement in follow-up talks and effectively enact them, and promote global green, low carbon, sustainable development."

Asked whether China had talked to the Trump administration about the Paris agreement, she said: "China and the United States have close communications about a wide variety of topics, and of course, this includes the issue of climate change."

Climate change was widely seen as one of the few bright spots of cooperation between Beijing and the previous Obama administration in Washington.

China and the European Union are set to issues a statement at a high-level meeting in Brussels committing to implement the climate deal, in a effort to bolster the pact as Trump appears set to abandon it.

China overtook the United States as the world's biggest emitter of greenhouse gases in 2007. But a U.S. withdrawal from the deal would give China more opportunity to burnish its image as a global leader.

China had fought previous attempts by foreign governments to limit carbon emissions, claiming it should be allowed the same space to develop and pollute that industrialised nations had.

But with its capital often choked by smog and its people angry about the environmental degradation that rapid development has wrought across the country, Beijing has become a strong proponent of efforts to halt global warming.