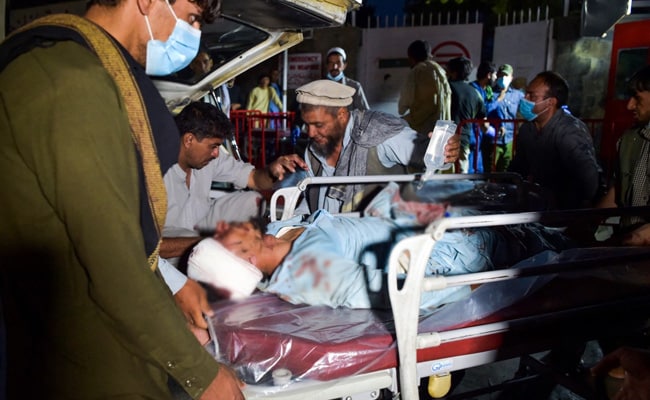 Kabul Airport Attack: 13 US service members were killed and 18 others wounded.

The Taliban said the two blasts killed between 13 and 20 people. A health official in the previous government said the count is at least 85.

President Joe Biden has vowed to "hunt" down the terrorists and make them "pay" for the deadly attacks outside the Kabul airport in which 13 US service members were killed and 18 others wounded.

"To those who carried out this attack, as well as anyone who wishes America harm notice, we will not forgive. We will not forget. We will hunt you down and make you pay. I will defend our interests and our people with every measure at my command," Biden told reporters at the White House on Thursday.

Here are the highlights on Afghanistan-Taliban crisis:

No Quick Recognition Of Taliban Government By US Or Allies: White House
The United States on Friday dismissed any chance of rapid recognition for a Taliban government and said it has not decided yet whether it will maintain a diplomatic presence in Afghanistan after next week's troop withdrawal. Read Here
Aug 28, 2021 05:10 (IST)

We Will Transfer Kabul Airport Back To Afghan People: US State Department
The United States will transfer Kabul airport back to the Afghan people, said State Department spokesperson Ned Price on Friday. Read Here
Aug 28, 2021 04:05 (IST)
France ends its evacuations from Afghanistan: Minister
France ended its air evacuations from Afghanistan late Friday after bringing around 3,000 people out of the country, Defence Minister Florence Parly announced.
"Operation Apagan, begun on August 15 at the request of the president, ended this evening. In less than two weeks, the French military has brought some 3,000 people to safety, including more than 2,600 Afghans," Parly tweeted.
Aug 28, 2021 03:23 (IST)

British Prime Minister Boris Johnson Promises Help To Afghans Still Seeking Resettlement: Will Do Whatever We Can
British Prime Minister Boris Johnson said on Friday that he would do his utmost to help Afghans who are eligible for resettlement in Britain but have been unable to reach Kabul airport for evacuation. Read Here
Aug 28, 2021 02:37 (IST)

Upon our departure, we will transfer the Kabul airport back to the Afghan people: US State Department spokesperson Ned Price pic.twitter.com/E4J4xymzaj

1,05,000 People Evacuated From Afghanistan Since Mid-August, Says US
About 12,500 people were evacuated from Afghanistan on Thursday, raising the total number of evacuees amid the Taliban takeover of Kabul to roughly 105,000 since August 14, the White House said on Friday. Read Here
Aug 28, 2021 01:43 (IST)

US On Alert For More Kabul Attacks, Says Next Few Days Will Be Most Dangerous
U.S. forces helping to evacuate Afghans desperate to flee Taliban rule were on alert for more attacks on Friday after an ISIS suicide bombing killed at least 92 people, including 13 U.S. service members, just outside Kabul airport. Read Here
Aug 28, 2021 01:21 (IST)

France Could Extend Kabul Evacuations Beyond Today, Says Minister
France could extend the evacuation of French citizens and Afghans in danger from Kabul beyond Friday, a minister said, after Paris previously indicated its airlift mission would end in the evening."
Aug 27, 2021 13:59 (IST)
Turkey holds first talks with the Taliban in Kabul: Erdogan
Aug 27, 2021 12:46 (IST)
Indian envoy at UN Security Council condemns Kabul terrorist attack
India's Permanent Representative to the United Nations, TS Tirumurti on Thursday condemned the terrorist attack in Kabul and extended condolences to the families of the victims.

"In the UN #SecurityCouncil meeting this afternoon on Ethiopia, I prefaced my statement by strongly condemning the #terroristattack in #Kabul today," tweeted Mr Tirumurti.

Mr Tirumurti was speaking at United Nations Security Council (UNSC) on Peace and Security in Africa. The meeting was on the worsening situation in Ethiopia, amid the Tigray crisis.

"Let me begin by strongly condemning the terrorist attack in Kabul today. We extend our heartful condolences to the families of the victims of this terrorist attack. Today's attacks reinforce the need for the world to stand unitedly against terrorism and all those who provide sanctuaries to terrorists," said the Indian envoy.

"We will process those people that we have brought with us, the 1,000 people approximately inside the airfield now," British Defence Secretary Ben Wallace told Sky News. "And we will seek a way to continue to find a few people in the crowd, where we can, but overall the main processing has now closed and we have a matter of hours."

AFP
Aug 27, 2021 12:12 (IST)
Afghanistan Crisis LIVE Updates: UK says it is in last stages of Kabul evacuations, processing ended
British forces have entered the final stages of evacuating people from Kabul's airport and processing facilities have closed, Britain's defence ministry said on Friday.
The effort would now focus on evacuating British nationals and others who have already been cleared to leave and are already at the airport, the ministry said.No further people would be called forward to the airport for evacuation, it said.
"It is with deep regret that not everyone has been able to be evacuated during this process," defence minister Ben Wallace said in a statement.

Wallace later told Sky News television that Thursday's attack at the airport, which killed 85 people including 13 U.S soldiers, had not sped up Britain's timetable for ending the evacuation operation.
He said the threat of further attacks would grow as the operation neared its conclusion.
So far, Britain has evacuated more than 13,700 British nationals and Afghans, representing the second biggest airlift by the country's air force after the Berlin Airlift in 1949, the ministry said.

Aug 27, 2021 11:29 (IST)
Kabul Blasts: Deadliest Day For US Military In About A Decade
Two explosions outside Kabul's international airport killed 12 U.S. service members and at least 60 Afghans, and wounded dozens more, less than a week before U.S. forces are due to depart
Aug 27, 2021 11:25 (IST)
Afghanistan-Taliban Crisis LIVE Updates: 'Learned From Master (Pak)': Amrullah Saleh On Taliban Denying ISIS Links
The self-proclaimed ''caretaker'' President of the Afghanistan Amrullah Saleh on Friday said that the Islamic State-Khorasan Province (IS-K) has links with the Taliban and the Haqqani network, particularly the ones operating in Kabul.
Mr Saleh also hit out at the Taliban for denying links with ISIS and said that it is similar to the denial of Pakistan on Quetta Shura.

"Every evidence we have in hand shows that IS-K cells have their roots in Talibs & Haqqani network particularly the ones operating in Kabul. Talibs denying links with ISIS is identical/similar to the denial of Pakistan on Quetta Shura. Talibs have learned very well from the master," Mr Saleh said in a tweet.
READ HERE
Aug 27, 2021 11:24 (IST)

Afghanistan-Taliban Crisis LIVE Updates: What Is IS-K And What Is Its Relationship With Taliban?
ISIS had been highly critical of the deal last year between Washington and the Taliban that led to the agreement for withdrawing foreign troops, accusing the group of abandoning the jihadist cause
Aug 27, 2021 10:24 (IST)

Kabul Airport Attack: Saw Doomsday: He Spent 10 Hours In Kabul Airport Queue. Then, A Blast
Even for a city as used to violent death as Kabul, the scenes after twin blasts tore through crowds thronging outside the airport in hope of evacuation were apocalyptic.
Aug 27, 2021 09:18 (IST)
Kabul Airport Attack: At Kabul Airport, Narrow Escape For 160 Afghan Sikhs, Hindus
Around 160 Sikh and Hindu citizens of Afghanistan may have narrowly escaped Thursday's twin blasts near the Kabul airport that killed several people. These members of the war-ravaged country's minority communities have now taken refuge inside a Gurdwara, informed people have said. Around 145 Afghan Sikhs and 15 Hindus were at the spot last night hours before the blasts at the Hamid Karzai International Airport in Afghanistan's capital. They were looking to make their way out of the country following the takeover last week by the Taliban. Read Here
Aug 27, 2021 09:11 (IST)
"We Will Hunt You Down, Make You Pay," Joe Biden Warns Kabul Bombers
US President Joe Biden pledged Thursday to hunt down the perpetrators of the suicide bombings that killed 12 American troops in Kabul and said the United States will not be deterred from its mission to evacuate thousands of civilians from Afghanistan. "To those who carried out this attack as well as anyone who wishes America harm, know this: We will not forgive. We will not forget. We will hunt you down and make you pay," Biden said.
Aug 27, 2021 08:27 (IST)
Kabul Airport Blast: 60 Civilians, 13 US Troops Killed In Kabul Blast, ISIS Claims Attack
ISIS struck the crowded gates of Kabul airport in a suicide bomb attack on Thursday, killing scores of civilians and at least 13 U.S. troops, disrupting the airlift of tens of thousands of Afghans desperate to flee. Hours after the twin blasts, a third explosion was reported by news agency AFP while unconfirmed reports said there may have been more. Read Here
Aug 27, 2021 07:53 (IST)
Kabul Airport Attack: US Braces For More ISIS Attacks After Carnage At Kabul Airport
U.S. troops helping to evacuate Afghans desperate to flee Taliban rule braced for more attacks on Friday after ISIS struck the crowded gates of Kabul airport, killing scores of civilians and at least 13 U.S. troops. Kabul health officials were quoted as saying 60 civilians were killed in the attack on Thursday. Video shot by Afghan journalists showed dozens of bodies strewn around a canal on the edge of the airport. At least two blasts and gunfire rocked the area, witnesses said.
Aug 27, 2021 06:56 (IST)
Joe Biden reaffirms August 31 troop pullout deadline from Afghanistan
President Joe Biden on Thursday reaffirmed August 31 as the deadline for US troops to leave Afghanistan, in the wake of a deadly attack on Kabul airport.
Biden, who earlier vowed to continue the evacuation of civilians from Kabul, said there remained an "opportunity for the next several days, between now and the 31st, to be able to get them out."
"Knowing the threat, knowing that we may very well have another attack, the military has concluded that that's what we should do. I think they are right."