A Flight Attendant Smashed Wine Bottles On A Man Who Tried To Open The Exit Midair, FBI Says

Joseph Hudek IV was eventually subdued by multiple people on the Seattle-to-Beijing flight - in a melee where bottles of wine became weapons. 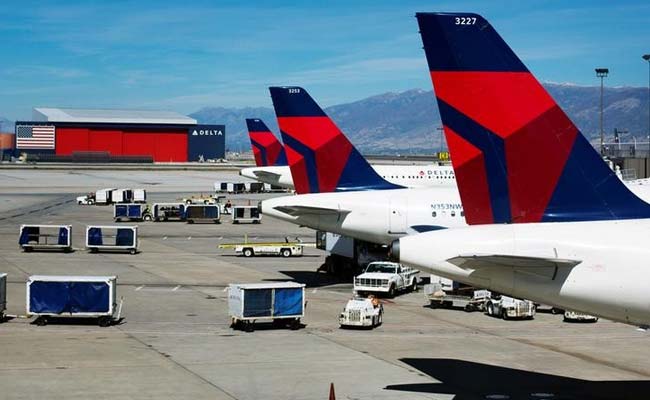 The pilot reported the emergency and swung the plane back toward Seattle.

Armed with fists and an unexplained determination, a man attacked Delta Air Lines crew and passengers Thursday as he tried to pry open an exit door midair, according to the FBI.

Joseph Hudek IV was eventually subdued by multiple people on the Seattle-to-Beijing flight - in a melee where bottles of wine became weapons.

He and more than 200 other people were on board when the plane took off around 5 p.m. from Seattle-Tacoma International Airport. Nothing about his background, as described in an FBI affidavit, seemed extraordinary: He was 23, flying on a dependent pass, which an airline spokesman told the Seattle Times are sometimes issued to relatives of Delta employees.

Hudek had ordered a single beer before takeoff, and appeared sober, according to the FBI.

The Boeing 767 had been flying about an hour - crossing over Vancouver Island - when Hudek rose from his first-class seat and walked into the bathroom.

He was inside about two minutes, according to the affidavit. Then he "lunged toward the forward right exit door of the aircraft, grabbed the handle" and tried to pull it open.

Two flight attendants immediately tried to stop Hudek, wrote an FBI agent who later interviewed people on the plane. They called for help when he pushed them away and kept trying to force the lever that held the door in place, the agent wrote.

Dustin Jones, seated just behind the first-class curtains, told KIRO-TV that a flight attendant ran toward the back of the plane and announced: "Code 3."

A flight attendant asked passengers for help and called the pilot, according to the FBI agent's affidavit. The pilot reported the emergency and swung the plane back toward Seattle.

A second attendant kept trying to subdue Hudek, but was punched and knocked to the ground.

A man got out of his seat to help. Witnesses would tell the FBI that Hudek punched him in the face repeatedly and hit him with a bottle of red wine, of which several were laying around.

Having fought off the initial resistance, the FBI agent wrote, Hudek went back to the door and kept working on the lever.

By now, other passengers were scared. Hudek had raised the lever halfway up, according to the affidavit. Flight crew would later tell the FBI agent that had the plane been flying low, the door could have opened.

A flight attendant picked up a wine bottle, then a second one, and smashed them each over Hudek's head, according to the FBI.

"Hudek did not seem impacted by the breaking of a full liter red wine bottle over his head," the FBI agent wrote, "and instead shouted 'Do you know who I am?' or something to that extent."

He kept fighting, according to the affidavit: breaking from a passenger's headlock and struggling even after multiple passengers had joined the fray.

But he was outnumbered, and eventually subdued - held down in the galley, zip-ties fastened around his limbs while a flight attendant told a passenger to return the lever to its proper place.

The U.S. attorney's office charged Hudek with interfering with a flight crew, and released a photo of the galley taken after the plane landed back at the Seattle airport. It looked like a trashed hotel room: dishes and smashed food strewn beneath an "EXIT" sign; the door and carpet sprayed with red wine, or worse.

"Somebody had blood on their shirt," passenger Britteny Gardner told KIRO-TV.

Even after all that, passenger Dustin Jones told KIRO, his energy had still not been exhausted.

"He turned the wheelchair over in the middle of the airport," Jones said, "screaming for people to help him."

In a brief statement, Delta confirmed a "security incident" midflight, but provided no details. A flight attendant and the first passenger who tried to restrain Hudek where both taken to a hospital with "severe facial injuries," according to the affidavit.

Promoted
Listen to the latest songs, only on JioSaavn.com
Hudek could not be reached for comment by The Washington Post. The Seattle Times attended his first court appearance on Friday, and noted that he looked scraped up too.