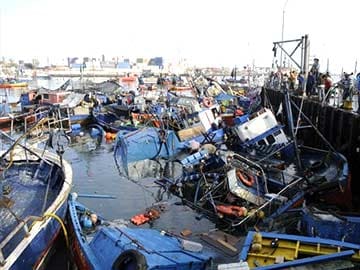 Fishing boats washed ashore by a small tsunami, sit in Caleta Riquelme, adjacent to the port, in the northern town of Iquique, Chile, after magnitude 8.2 earthqauke struck the northen coast of Chile, Wednesday, April 2, 2014

It caused buildings to shake in the port of Iquique, which saw some damage from the big quake on Tuesday. There are no immediate reports of new damage or injuries.

Promoted
Listen to the latest songs, only on JioSaavn.com
The latest tremor came 45 minutes after a strong 6.4-magnitude aftershock shook the same area.

The stronger aftershock's epicenter was 14 miles (23 kilometers) south of Iquique. The USGS said the aftershock had a depth of 12 miles (20 kilometers).
Comments
ChileTsunamiearthquakeIquique