The safety commission and Fisher-Price asked consumers to stop using the sleeper after an infant reaches three months of age, "or is capable of rolling over." 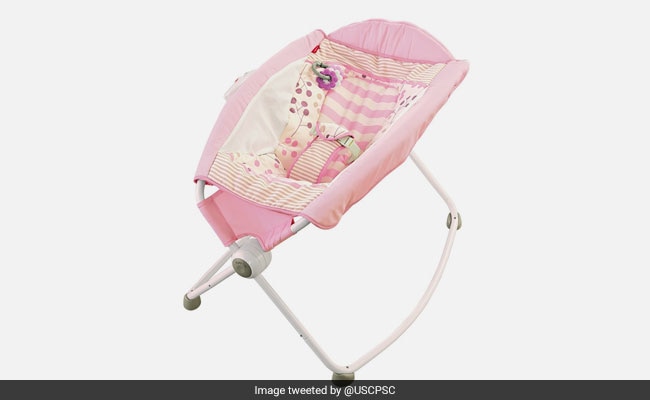 All models of Rock 'n Play sleepers by Fisher-Price are being recalled after reports of infant fatalities occurring while using the product.

More than 30 infant fatalities have been reported since the product was introduced in 2009, "after the infants rolled over while unrestrained, or under other circumstances," according to the Consumer Product Safety Commission.

The recall came three days after the American Academy of Pediatrics wrote a news release calling on the commission to recall the products, pointing to their danger. Last week, the safety commission and Fisher-Price asked consumers to stop using the sleeper after an infant reaches three months of age, "or is capable of rolling over."

Between 2011 and 2018, 32 babies have died, "included babies even younger than the 3-month threshold cited in the initial warning, which is alarming," the AAP noted in their release.

"This product is deadly and should be recalled immediately," said Kyle Yasuda, president of the American Academy of Pediatrics, in the news release. "When parents purchase a product for their baby or child, many assume that if it's being sold in a store, it must be safe to use. Tragically, that is not the case."

Consumer advocates say the recall has too many restrictions and could cause confusion.

Weintraub and others point to Fisher-Price's offer of a full refund only to people who have owned the product six months or less. People with older Rock 'n Plays are reimbursed on a sliding scale - less money the longer they've owned it.

"It will discourage participation," said Nancy Cowles, executive director of Kids in Danger.

Rachel Moon, a doctor and chair of the AAP's task force on Sudden Infant Death Syndrome, added in a news release that "infants should always sleep on their back, on a separate, flat and firm sleep surface without any bumpers or bedding."

"Putting safety first, in partnership with the CPSC, Fisher-Price issued a voluntary recall of our Rock 'n Play Sleepers," Fisher-Price tweeted. "All product use should be discontinued."

Consumers can find out if they are eligible for a refund or voucher at www.service.mattel.com.