Cynomolgus monkeys -- also known as long-tailed macaques -- have recently been in demand for research into vaccines against viruses. 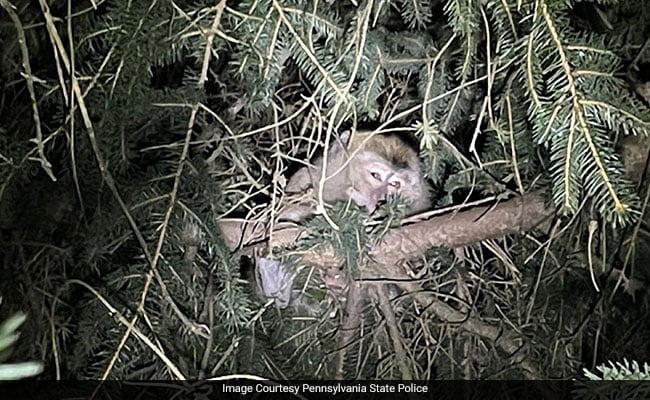 Pennsylvania State Police released an image of one primate perched in a tree.

Three monkeys have been found and killed after a truck carrying 100 primates to a laboratory crashed, allowing them to escape and triggering a police hunt.

The vehicle turned in front of an oncoming dump truck near Danville, Pennsylvania, on Friday en route to a lab in Florida.

Police said on Twitter Friday that "a small number of monkeys may have fled the crash scene into the surrounding area."

By Saturday night, police said all 100 monkeys had been accounted for.

Local news site WNEP reported that the escaped monkeys were euthanized, citing the US Centers for Disease Control and Prevention.

The CDC told WNEP the monkeys landed Friday in New York and were originally from Mauritius.

It was previously believed that four monkeys were missing after the crash.

WNEP said a police helicopter with thermal cameras was used to track down the cynomolgus monkeys, while officers on the ground used powerful flashlights.

Pennsylvania State Police released an image of one primate perched in a tree off Route 54.

Cynomolgus monkeys -- also known as long-tailed macaques -- have recently been in demand for research into vaccines against viruses.