British government sources believe 23,000 people with extremist tendencies are living in the UK. Of this, 3,000 people have been judged to pose a threat. 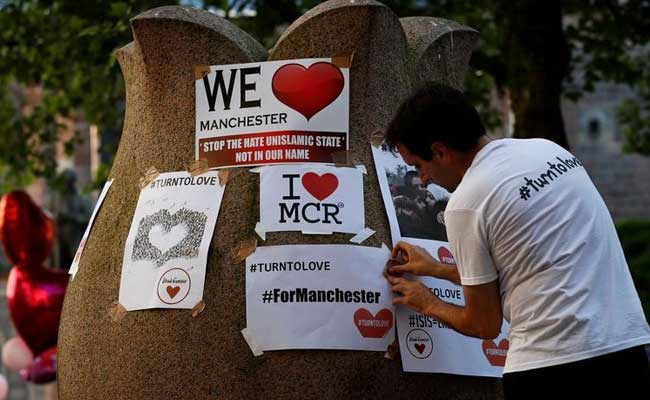 A man attaches a placard in memory of the concert blast victims in central Manchester. (Reuters)

London: Some 23,000 terror suspects may be at large across Britain, the country's intelligence community say after the Manchester attack by a Libyan-origin man who was on the radar of the UK's spy agencies. The scale of the challenge has emerged in the aftermath of the Manchester suicide bombing that killed 22 people and left 119 injured.

Reports that Libyan-origin Salman Abedi had been on the radar of intelligence services had added pressure on the MI5 to reveal what they knew. MI5 or Military Intelligence 5 is a British spy and counter-terrorism agency.

Now government sources have told sections of the British media that they believe 23,000 people with extremist tendencies are living in the UK. Of this, 3,000 people have been judged to pose a threat and are under investigation or active monitoring in 500 operations being run by police and intelligence services.

The 20,000 others have featured in previous inquiries and are categorised as posing a "residual risk". Meanwhile, Greater Manchester Police released CCTV images showing suicide bomber Abedi on the night he attacked Manchester Arena at the end of a US singer Ariana Grande's concert.

The images are the first to show what the 22-year-old looked like when he carried out the terror attack. Fourteen locations are still being searched in connection with the attack and 11 men remain in custody on suspicion of terror offences.

"We have made significant progress in this fast-moving and complex investigation, working with the national counter-terrorism policing network and UK intelligence partners and securing the arrests of 11 people who remain in custody," a Greater Manchester Police statement said.

"The level of resources we have available to us remains the same as we continue to take positive action so you will notice additional officers, including armed officers, on patrol especially at a number of events this weekend to ensure the security and safety of everyone but it's important that people remain alert and vigilant," the statement said.

Promoted
Listen to the latest songs, only on JioSaavn.com
The police made an appeal to the public for information about the bomber's movements since 18 May, when he returned to the UK from Libya. A joint statement from Greater Manchester Police Chief Constable Ian Hopkins and Neil Basu, Scotland Yard's senior national co-ordinator from UK Counter-Terrorism Policing, said, "This is still a live investigation which is not slowing down. Our priorities are to understand the run-up to this terrible event and to understand if more people were involved in planning this attack."

The UK's terror threat level was lowered to "severe" from "critical" yesterday as a result of the arrests, which means an attack is still highly likely if not imminent.