2 Hours Of Horror: What Happened In US' Worst-Ever Mass-Shooting

Country music singer Jason Aldean was in the middle of a guitar solo at an outdoor concert on the Las Vegas Strip on Sunday night and the sold-out crowd was enjoying the moment, unaware of the horror about to unfold. 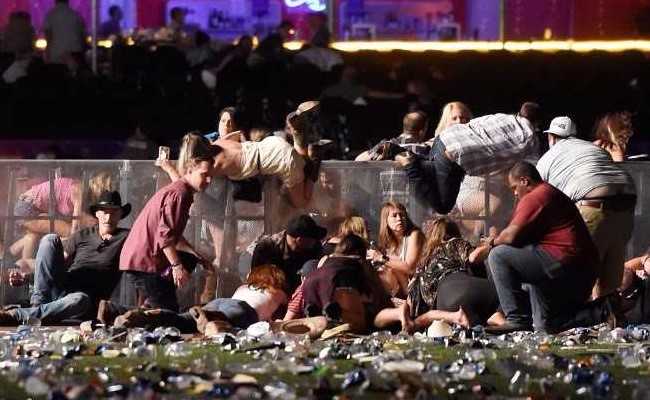 When the shooting began, some refused to believe a massacre was underway.

Country music singer Jason Aldean was in the middle of a guitar solo at an outdoor concert on the Las Vegas Strip on Sunday night and the sold-out crowd was enjoying the moment, unaware of the horror about to unfold.

"It's not real gunshots," one man yelled as panicked concertgoers around him ducked for cover. "It's the fireworks, fireworks! Guys, stop, stop."

The time was 10:07 p.m. (0507 GMT), the start of nearly two hours of terror before police would confirm that the gunman was down.

Police would eventually reveal that 64-year-old Stephen Paddock, armed with at least 10 rifles, fired into the crowd of 22,000 people from his 32nd floor room at the Mandalay Bay Resort and Casino. At least 59 people were killed and 527 wounded in the deadliest mass shooting in modern U.S. history.

Disbelief quickly gave way to reality as volley after volley of rapid gunfire rained down on the Route 91 Festival.

"We got shots fired!" a Las Vegas police officer radioed in at 10:08 p.m. "It sounded like an automatic firearm." 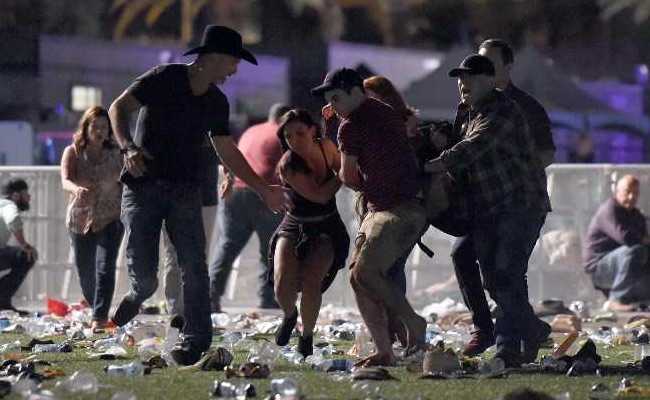 The terrifying moments were recorded by many social media users. Reuters pieced together events based on verified video, police and other official statements, and reporters on the scene from the Las Vegas Review-Journal.

"I'm pretty sure a terrorist attack just happened next to me. I'm at Mandalay Bay," Las Vegas Twitter user @GLOKMIN tweeted early on in the assault.

Out on the streets, taxi drivers received word of the danger within minutes when an advisory of police activity came across the blue screens on their taxi meters.

Minutes later, police ordered people to take cover inside the Mandalay Bay. "Even cabbies must exit their vehicles and go into hotel," LV Cabbie Chronicles tweeted at 10:28 p.m.

Half an hour after the shooting, police said on Twitter that they were investigating an active shooter, and people who did not flee rushed to help.

Lindsay Lee, a self-described Las Vegas tattoo model, turned her truck into an ambulance when a man at the scene asked her to take victims to the hospital.

"Go ahead, put them all in the back," she said in one video.

Then came a moment that few volunteers could be prepared for.

"One died in the back of the truck and my fiance had to carry him inside the hospital," Lee said on Instagram. "This was a nightmare. I've never ran for my life like I did tonight."

A full 90 minutes after the shooting started, police were still ordering people on the street to get down and take cover.

Rachel Crosby, a reporter for the Review-Journal, saw events unfold from University Medical Center, the only Level 1 trauma centre in Nevada, where all the trauma beds were full.

The bloodshed took an obvious toll on hospital staff.

"Jesus," one nurse repeated over an over. Another nurse phoned a loved one, got on the ground, head down, and took deep breaths.

Police have yet to pinpoint when the deadly assault came to an end.

But finally, just short of two hours after the shooting began, came the first sign that the danger had passed.

"Confirming that one suspect is down," Las Vegas police tweeted at 11:58 p.m. "This is an active investigation. Again, please do not head down to the Strip at this time."

(Except for the headline, this story has not been edited by NDTV staff and is published from a syndicated feed.)
Comments
Las Vegas shootingStephen Paddock