Kerala Students Union activists jumped the fence of the Secretariat building and tried to reach the ground floor of the Assembly building. 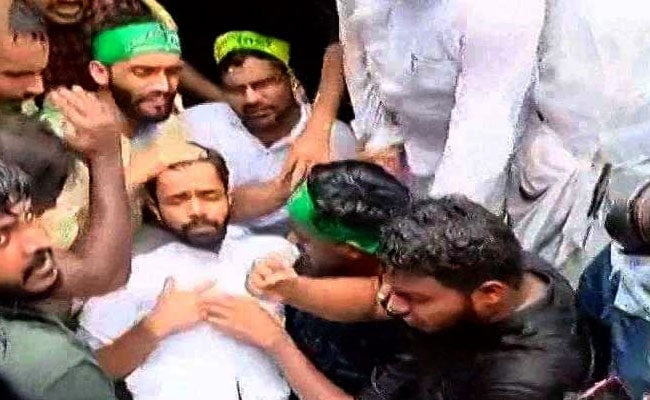 Kerala Students Union activists protest in front of the Secretariat

Four Kerala Students Union (KSU) activists on Wednesday breached the fencing of the state Secretariat even as a Cabinet meeting was underway to protest against the killing of a fellow student at the University College in Thiruvananthapuram.

The KSU activists were protesting in front of the Secretariat, demanding a judicial probe into developments that have taken place after the incident, when the four jumped the fence of the Secretariat building and tried to reach the ground floor of the Assembly building.

Three of them were taken into custody before they reached the entrance, while a woman activist managed to reach the entrance and shouted slogans demanding Kerala Chief Minister Pinarayi Vijayan to announce a judicial probe.

Last week, eight members of the Student Federation of India (SFI) -- the student wing of the Communist Party of India-Marxist (CPI-M) -- allegedly stabbed a B.A. final year student Akhil and injured two others of the Thiruvananthapuram University College, located a stone's throw away from the Secretariat.

KSU state president KM Abhijith has been on an indefinite hunger strike, which entered the third day today.

The Kerala Police has so far arrested five members of the Student Federation of India (SFI), accused of stabbing a student of the Thiruvananthapuram University College, located a stone's throw away from the Secretariat.

Students attempting the breach took the police and security officials by surprise, and it took a while before women police officials could reach the spot.

After a brief tussle, the woman activist was taken into custody.

The Kerala Police has so far arrested five members of the SFI. Both the prime accused -- Shivaranjith and Nazeem -- in the case are office bearers of the SFI unit in the college. They have secured first and 28th rank in the Public Service Commission (PSC) of the 4th battalion of officers of the Kerala Armed Police (Kasaragod) list.

The police has recovered blank answer booklets of University of Kerala from the office of the SFI unit in the University College besides recovering fake seals of the Physical Education department from the house of Shivaranjith.

Senior Congress legislator VD Satheeshan, who was present at the venue of the KSU protest, said that with every passing day fresh revelations are coming up and the credibility of both the University of Kerala and even the PSC has taken a beating.

"Examinations of both the University and the PSC, conducted at the University College, has become a farce and if one takes a look into the past 15 years of how many SFI student leaders have secured government jobs, everything will be revealed. Only a judicial probe will reveal the truth," said Mr Satheeshan.