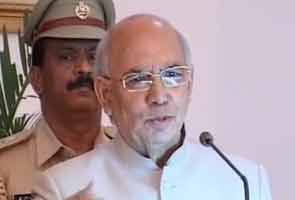 The state's Home Minister said that the Governor had passed the order to suspend Mr Natarajan, and has asked for a detailed inquiry to be conducted into the matter.

Terming the incident as unfortunate, the state's Chief Information Commissioner Dr. Sibi Mathews told NDTV that the move would erode the people's trust in the institution. He also said that Mr Natarajan would challenge the suspension order in court although the latter himself refused to comment on the issue.

A statutory inquiry led by a Supreme Court judge will now look into the matter against the suspended Information Commissioner. If the inquiry proves misconduct on the part of Mr Natarajan, the Governor has the authority to remove the latter from office.

A report by the Home Ministry had earlier said that Mr Natarajan tried to repeatedly influence the probe against Mr Achuthanandan. Mr Natarajan was asking the Investigating Officer to absolve the former chief minister as a first accused in a case where he allegedly aided his relative in getting land illegally, the report said. The officer, VG Kunhan, suspected an attempt at sabotaging the inquiry and subsequently wrote a letter to his senior, attaching an audio recording of an alleged conversation between him and the Mr Natarajan in September. The report also stated that Mr Natarajan exceeded his brief and showed inappropriate behaviour, according to sources.

CPI(M) Politburo member MA Baby said there was no evidence till now to prove that Mr Nataratan initiated the conversation with the Investigating Officer at the behest of Mr Achuthanandan, who has maintained that he did not ask anybody to call on his behalf.

Promoted
Listen to the latest songs, only on JioSaavn.com
Mr Natarajan, said to be a close aide of Mr Achuthanandan, was appointed as the Information Commissioner during the latter's tenure as Chief Minister of Kerala. Oommen Chandy, the current chief minister, is said to have opposed Mr Natarajan's appointment.

Mr Achuthanandan is being investigated in the land scam case for using his influence as chief minister to allot land in Kasargod to one of his relative, TK Soman, 'unjustifiably'. The CPI(M) stalwart has slammed the allegations as fabricated and has said he has nothing to do with the audio records.