Telangana plane crash: Citing preliminary information, a police official said the aircraft, which came from Andhra Pradesh side, crashed at a village in Nalgonda district. 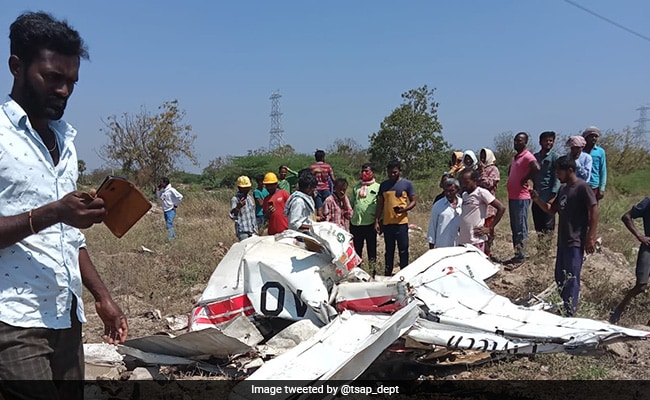 A woman trainee pilot died when an aircraft belonging to a private aviation academy crashed in Nalgonda district of Telangana on Saturday, police said.

Aviation Minister Jyotiraditya Scindia said he was shocked. A team of investigators is on its way to the mishap site.

Mahima (28), who has been training for the past four months, took off on the Cessna 152 aircraft at about 10.25 AM and it was flying over Tungaturthi village in the district, a police official told news agency PTI.

An eye-witness saw the plane crashing down on a field and breaking into pieces. There was no fire after the crash, the official said.

By the time the eye-witness reached the plane, its pilot was dead. She was only occupant on the aircraft.

The academy is based at Macherla in Andhra Pradesh and very close to Telangana. The trainee pilot took off from an airstrip meant for training, said the official.

She was on a routine flight and was supposed to return to the base. She was a native of Tamil Nadu, but used to live at Secunderabad.

Mr Scindia said on twitter he was shocked to hear about the crash.

"An investigation team has been rushed to the site. Unfortunately, we lost the student pilot," he noted.

Koo App
Shocked to hear about the tragic crash of a training aircraft in Nalgonda, Telangana. An investigation team has been rushed to the site. Unfortunately, we lost the student pilot. My heartfelt condolences to the bereaved family & loved ones.- Jyotiraditya M. Scindia (@JM_Scindia) 26 Feb 2022

The minister expressed condolences to the bereaved family.