Dejected Telangana Farmer Digs His Own Grave, Tries To Bury Himself Alive

Meka Sudhakar Reddy said that he was frustrated that revenue officials in Telangana had refused to issue him documents for his of five acres of land.

Meka Sudhakar Reddy farmer was saved by villagers who rescued him.

Six feet under the ground that he once tilled to feed his family, a farmer in Telangana lay half buried - alive but nearly crushed by hopelessness. Meka Sudhakar Reddy, a resident of Mahbubabad district, said he was frustrated that revenue officials had refused to issue him a "pattadar passbook", documents that show he is the owner of five acres of land. And so he decided to bury himself in a desperate attempt to send a message.

Mr Reddy said between him and his three brothers, they own 15 acres in the district's Ramannagudem mandal. He said revenue officials had told him they cannot hand over his land passbook as a political leader had asked them not to do it. 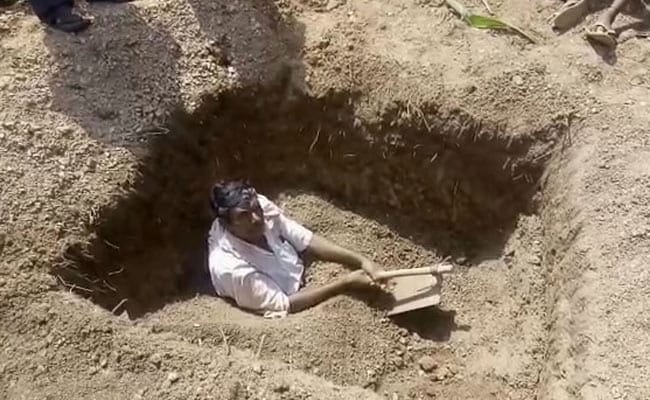 The video of Telangana farmer Meka Sudhakar Reddy trying to bury himself was widely shared on social media.

The farmer was saved by villagers who rescued him. The incident has managed to catch public attention after it went viral on social media and a probe has now been ordered into what went wrong.

In recent months, there have been multiple cases of farmers alleging that they were being denied rightful documents by local revenue officials in Telangana. Some complained about corruption. Some appealed on social media. There was even a video of a farmer falling at the feet of a tehsildar.

Chief Minister K Chandrasekhar Rao had himself responded to some of these complaints, reassuring the farmers that justice would be done and erring officials would be punished. He has also proposed a new revenue law that would overhaul the revenue administration in the state to ensure more transparency and less corruption.