'Ration From Anywhere' In Telangana From Tomorrow

Cardholders need not go particularly to their allotted ration shop but can get ration from anywhere in the state, an official said. 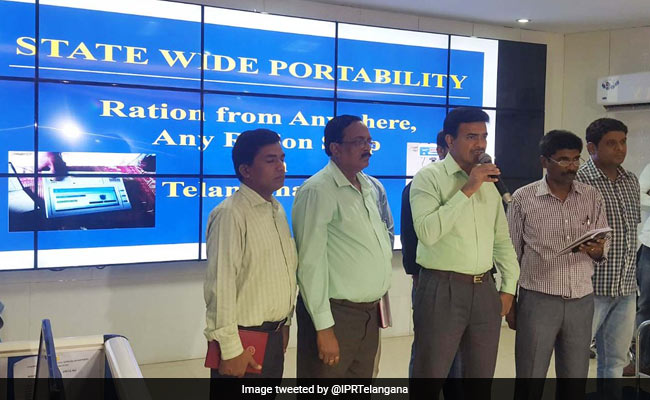 Telangana will omplement the Ration From Anywhere system from April 1.

Hyderabad: The Telangana Civil Supplies Department will implement 'Ration from Anywhere' from tomorrow, allowing some 2.75 crore beneficiaries in the state to pick up government subsidised grains from any of the state's 17,000 ration shops under the public distribution system (PDS).

"From tomorrow onwards card holders can avail essential commodities at any ration shop across the state under the portability scheme," Commissioner for Civil Supplies C V Anand said.

The scheme, which has already been implemented district wise and yielded a good response, will now be put in place state-wide, where beneficiaries can avail ration from anywhere in the state, he said in a press release.

Mr Anand said the portability scheme has created competition between ration dealers and beneficiaries are getting better services.

Cardholders need not go particularly to their allotted ration shop but can get ration from anywhere in the state, Mr Anand said.

Families migrating or shifting from one place to another were unable to get ration from the nearest ration shop, but had to get rations from the allotted shop even if it was far away.

The beneficiaries had to wait for the ration shops to open and for the stock availability, he said.

From tomorrow, beneficiaries can get their essential commodities near their homes or any place, irrespective of the ration shop where their card is allotted.

Even if cardholders shift or move to other areas, they need not go for change of shop as they can get ration from any ration shop within the state, Mr Anand said.

He also said family members included in the ration card can get ration individually from anywhere in the state.

He said one can get the location near them by downloading T-Ration App.

Portability was implemented in 1,545 ration shops of Greater Hyderabad circle last year from June 1, which got tremendous response from card holders as they were able to get commodities from the shops close to them.

Promoted
Listen to the latest songs, only on JioSaavn.com
There are 85 lakh ration cards in the state and they get their ration from 17,000 ration shops.

"They all are linked to Aadhaar based biometric system which helps card holder get his/her ration from anywhere in the state," Mr Anand added.
Comments
Telangana Civil ServicesRation ShopPDS