Telangana celebrated its fifth Formation Day with Chief Minister K Chandrashekhar Rao stating that the state was marching ahead and progressing as a fruitful state. 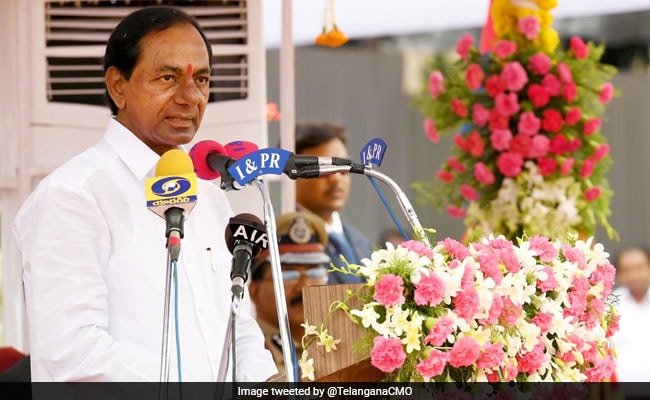 KCR said the Telangana government was successful in improving standards in education and health sectors.

Telangana celebrated its fifth Formation Day on Sunday with Chief Minister K Chandrashekhar Rao stating that the state was marching ahead and progressing as a fruitful state.

Addressing the main official function held at the Public Gardens in Hyderabad, the Chief Minister said Telangana could overcome several hurdles and obstacles during last five years and with incredible resolve moving forward in its journey towards growth.

KCR, as the Chief Minister is popularly known, paid tributes at the Telangana Martyrs' Memorial in Gun Park before proceeding to the Public Gardens where he unfurled the national flag and deliver his address.

The Formation Day celebrations were a low-key affair due to the extended spell of election code in the state up to June 8 on account of elections to rural local bodies. There were no parades by the police contingents at the main official function and the celebrations held at the headquarters of 32 other districts.

The Formation Day celebration was also made a simple affair due to continuing heat wave forcing postponement of reopening of schools to June 12.

The Telangana Rashtra Samithi chief claimed the results of the Assembly elections reflect the government's performance and to what extent people were impressed by it. "In every election from Panchayat to Parliament, every time, the victory was on our side and people gave us an unprecedented mandate," he said.

The Chief Minister also listed out welfare schemes launched and implemented during last five years. He claimed the government was successful in improving standards in education and health sectors.