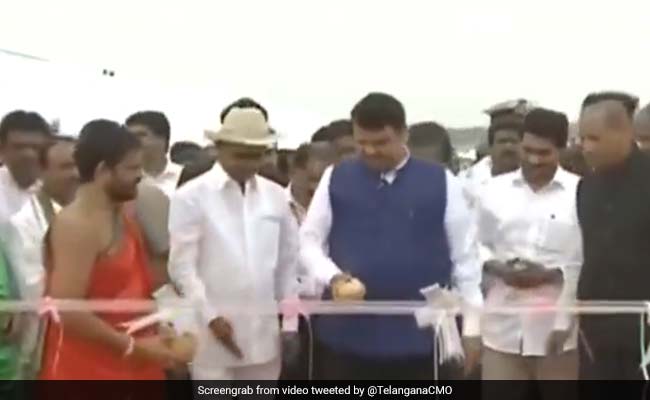 The project, built on the Godavari river, will lift the water to a height of half-a-kilometer and is expected It is expected to irrigate 45 lakh acres for two crops a year and take care of 70 per cent of the drinking water needs of the state.

The Kaleshwaram irrigation project was inaugurated with the three Chief Ministers, and Telangana and Andhra Pradesh Governor ESL Narasimhan participating in a series of programmes at the project site in Jayashankar Bhupalpally district, near the borders with Maharashtra and Chhattisgarh.

This is the event for which the Telangana Chief Minister reportedly missed the NITI Aayog meeting on Saturday as well as the all-party meeting to discuss "one nation, one poll", both of which were chaired by Prime Minister Narendra Modi. KCR had reportedly wanted to invite PM Modi for the grand event but when asked about it, he said it was not necessary to invite the Prime Minister for every big project. 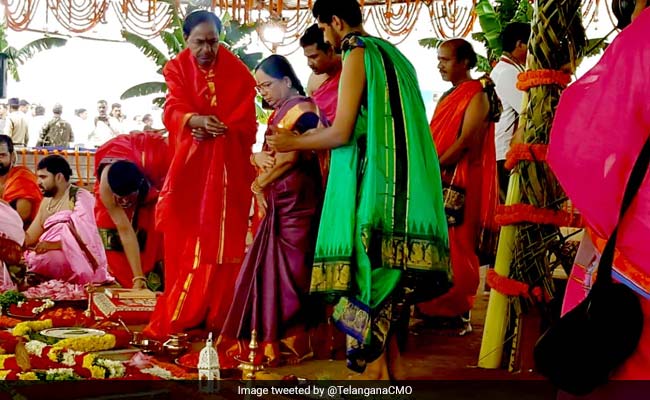 Kaleshwaram irrigation project: KCR performed a yagna ahead of the inauguration of the project.

Mr Rao aka "KCR" and his wife participated a yagna (ritual) ahead of the inauguration, to pray to the Godavari river to bless children with water in abundance.

KCR invited Mr Fadnavis after Maharashtra extended full cooperation for the construction of the project. In 2016, the two states signed agreements to solve inter-state disputes, paving the way for the mega project.

Inviting Jagan Reddy, fresh from a landslide election victory, is also significant as both the Telugu states have resolved to amicably solve their disputes over sharing of waters of Godavari and Krishna rivers. 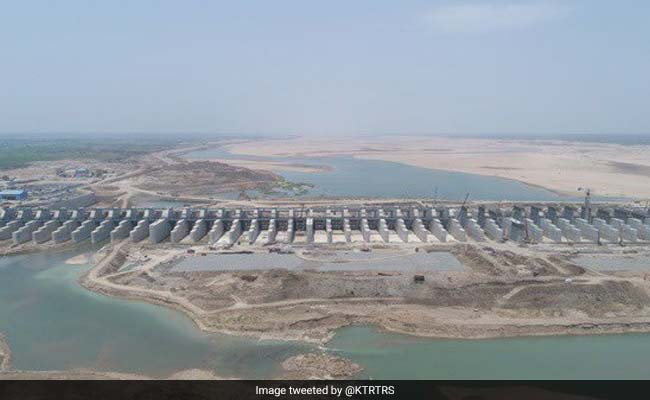 Kaleshwaram irrigation project: The foundation stone for the project in Telangana was laid in 2016.

KCR had attended Mr Reddy's swearing-in last month. He again met his Andhra Pradesh counterpart this week to invite him for the irrigation project's inauguration.

The project would also help in supplying drinking water to one crore population in Greater Hyderabad on a daily basis.

The foundation stone for the project was laid in 2016 and claimed by the Telangana government to be the world's biggest project of its kind completed in record three years.

The ambitious project did not come without its share of controversies. BJP leader Bandaru Dattatreya mocked KCR for "inaugurating a project when it was only 20 per cent complete". He also said the government has not released a detailed project report. The former union minister has demanded a white paper on the expenditure involved in the irrigation projects in the state, pointing out that the cost of the Kaleshwaram project has doubled from its projected cost.

The Congress in Telanagana, meanwhile, did not want Jagan Reddy at Friday's event. The Kaleshwaram project conceptualised during the time of Jagan Reddy's father YS Rajasekhara Reddy's rule in 2004 as Pranahita-Chevella project. KCR re-engineered and redesigned the project after he became Chief Minister in the newly-formed Telangana 2014 and renamed it.