The woman's husband alleged that his wife Parveen, who left for Oman on February 21 to start her job, is being made to work in many houses as a maid and is also being beaten up by her employer. 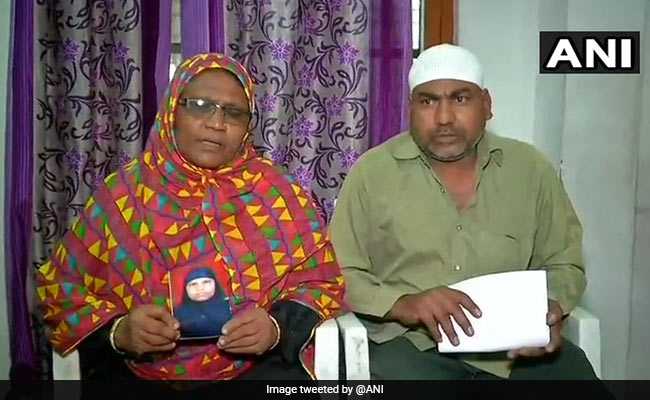 Family of Parveen, who has allegedly been trafficked to Oman.

Mother of a woman, who was allegedly trafficked to Oman on the pretext of a job, has sought External Affairs Minister Sushma Swaraj's help to rescue her daughter.

The woman from Hyderabad is stranded in Oman and is being ill-treated by her employers. Last month, the family members of the woman had filed a First Information Report in this regard at Amberpet police station of Hyderabad city.

In his complaint, victim's husband Shaik Jhangeer had said that he and his wife Parveen Begum met a travel agent Javeed for a job in Oman.

Mr Jhangeer alleged that Parveen, who left for Oman on February 21 to start her job, is being made to work in many houses as a maid and is also being beaten up by her employer. He also claimed that his wife is not receiving any payment for her services.

Speaking to ANI, Noorjahan Begum, mother of the victim, said, "We were told by the agent that my daughter will be working in a hospital. After reaching there she informed us that she is being made to work in a home as a maid. The situation of my daughter was fine for the first three months, but after that, her employers started torturing her and she is now forced to work in multiple houses. She is also not given food and is requesting us for immediate rescue."

Ms Noorjahan also said that her daughter's health has become worse and no medical care is being provided to her in the foreign land.

The family of the victim also said that the agent who helped the victim in getting the job is on the run.