"Free Haircuts": How 3 Barbers In Telangana Are Luring Voters For KCR

In the state's Siddipet town, three barbers are trying to garner support for Mr Rao, popularly referred to as KCR, in an extremely unique way. 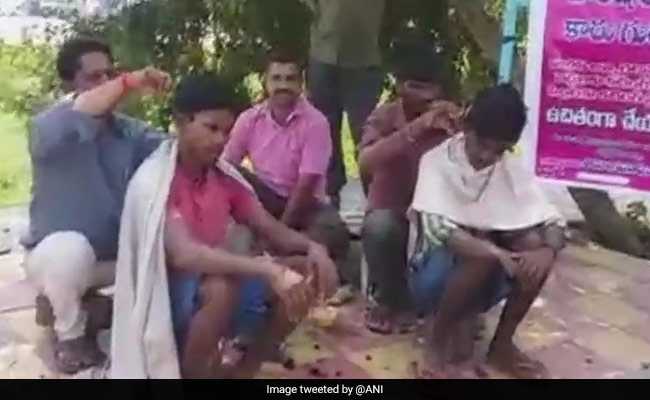 The three barbers urge locals in Siddipet to vote for TRS.

With care-taker Chief Minister K Chandrasekhar Rao keen on holding elections in Telangana by the end of the year, his supporters are already busy trying to sway the electorate in his favour.

In the state's Siddipet town, three barbers are trying to garner support for Mr Rao, popularly referred to as KCR, in an extremely unique way. They are offering free haircuts and urging locals to vote for KCR's party, Telangana Rashtra Samithi or TRS.

"So far, I've given 30 free haircuts and have urged people to vote for TRS so that the party wins the elections," Kothwal Srinivas, one of the barbers, told ANI.

KCR had earlier this month dissolved the state assembly, eight months ahead of schedule, paving the way for early state elections and was appointed the care-taker chief minister. KCR's move to go for early polls in Telangana was widely anticipated. Though the election would have been held in June 2019, KCR reportedly wanted to ensure that the focus during the state polls is on his role and his government's achievements, rather than on PM Modi or on the Congress.

Mr Rao had cited "political fragility" in the state as his reason for wanting early elections.

The Election Commission, which had rebuked the TRS administration for trying to usher in early polls, today issued a notice effectively barring the KCR government from announcing any new schemes until the state assembly polls are held.

"Neither the caretaker state government nor the central government shall announce any new schemes, or projects, in relation to that state or undertake any of the activities prohibited under the model code of conduct," the election body said.

The model code of conduct usually comes into force the day poll body announces elections. It remains in force till the electoral process is completed.