'Chennai, You are in Safe Hands': Woman Who Drove City's First Metro

Chennai: A young woman was behind the wheel today when the Chennai Metro rolled out for the first time, on a signal from Tamil Nadu chief minister J Jayalalithaa. (See pictures)

At around 12.15 pm, the Chief Minister, who was connected through video conference from her office, pressed a button and on cue, 28-year-old Preethi drove the metro train out of the Alandur station, gradually picking up speed to touch 80 km. She drove on a 10 km stretch in 18 minutes.

"It is challenging, but not difficult. You are in safe hands," she promised with a smile, speaking to NDTV later.

A year and a half of training has built up to this moment. 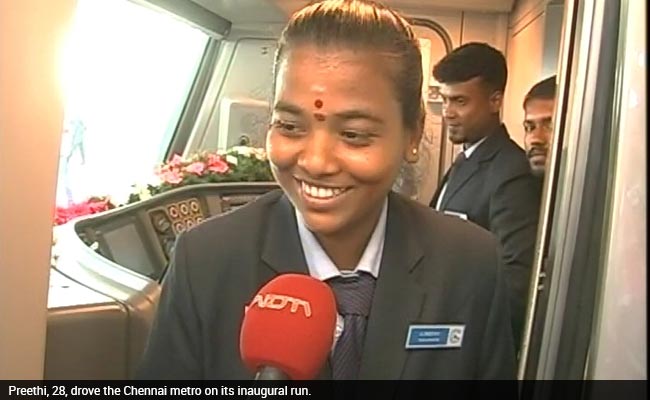 Her mother A Shanthi said she "floated with joy" at seeing her drive the train. "I really did. Earlier we thought it was too dangerous as she has to take care of more than 300 passengers. Now I am proud. She is trained."

Preethi, who has a diploma in electrical and electronics engineering, quit her job at a research centre and applied to the Chennai Metro. "She was the first woman driver and four others followed," said her father, R Anbu, a businessman.

The train has four coaches and will have a capacity of nearly 1,280 passengers.

The two corridors in the first phase will cover a 45-km stretch. The corridors will be partly underground and partly elevated, and cost Rs 16,500 crore, say officials.

The second corridor is likely to be ready by the end of this year.

The launch initially planned for October last year was plagued by delays. The Metro Rail Project plan was approved when the DMK was in power. For several people at the launch today, it was the end of a long wait.

"I wanted to board the first metro train, I hope metro makes travel easier and a pleasure," said K Ramesh a young executive.