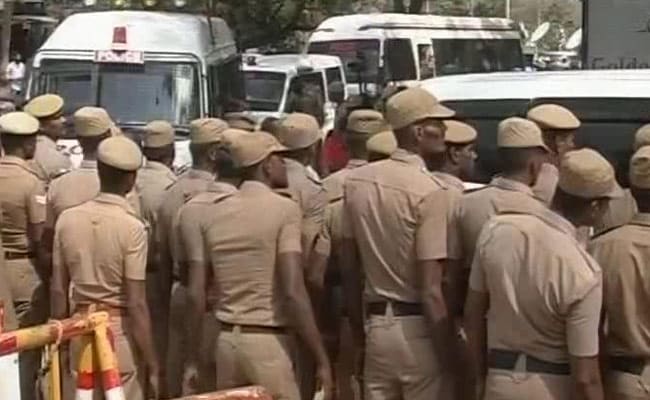 Chennai: VK Sasikala was at a luxury resort around 80 km from Chennai, along with lawmakers supposedly backing her bid to become Tamil Nadu Chief Minister, when she learnt that she has to go to jail for corruption and her political career is effectively over. The Supreme Court, confirming her conviction, asked her to surrender immediately.

Moments later, hundreds of policemen entered the Golden Bay resort, which had been off-limits to everyone but Ms Sasikala and her chosen few since over 100 AIADMK lawmakers were taken there five days ago.

The police reportedly have orders to wait for Ms Sasikala's move.

The 61-year-old has to surrender. It is not known yet where she intends to turn herself in, at the resort or at the home of J Jayalalithaa in Poes Garden, where she continues to live after the former Chief Minister's death in December.

Anyone could walk in at the resort today.

Ms Sasikala's bid to become Chief Minister meant that for five days, lawmakers at this resort were not allowed to meet anybody or even keep mobile phones.

A day after Chief Minister O Panneerselvam revolted against the party's decision to elevate her, Ms Sasikala ordered the lawmakers to various hotels and resorts, guarding her numbers for a test of strength.

The families of a few lawmakers even complained that they were "missing".  A lawmaker, SS Saravanan, escaped dramatically last night after climbing the walls and jumping out in T-shirt and shorts.

Promoted
Listen to the latest songs, only on JioSaavn.com
Ms Sasikala has to go to jail for four years, the court said. If she wants to become Chief Minister, she has to contest elections six years after her jail term, which means that her political ambitions will be frozen for 10 years.

Moments after the verdict, policemen were seen entering the resort that had been brought under heavy security cover this morning.