The DMK's Kathir Anand has won Tamil Nadu's Vellore Lok Sabha election by over 8,000 votes defeating AIADMK rival AC Shanmugam. With Vellore election result 2019, the DMK has taken the party's tally to 38 in the state. Vellore saw a neck and neck contest today. Of the 28 candidates for the Lok Sabha seat, the lead kept shifting between the candidates of DMK and AIADMK.

At the last count, AIADMK was pushed to the second place by arch rival DMK with a margin of 8,141 votes. 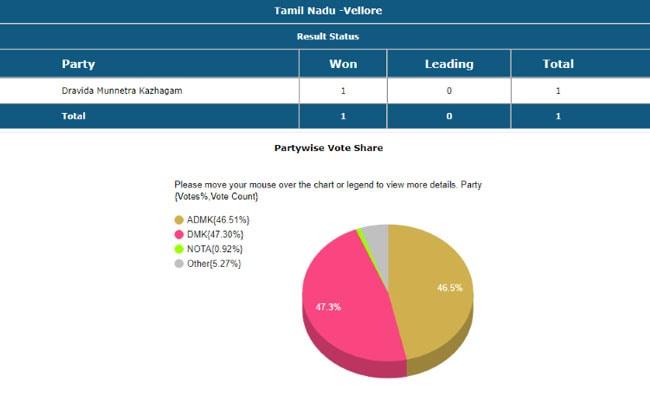 Vellore Election Result 2019: The voting in Vellore was held on August 5.

Right from start of the counting process this morning, the AIADMK was ahead of the DMK with the margin crossing 15,000 votes in successive rounds before it dwindled to 6,362 votes by the 10th round. From the 11th round, the DMK stayed ahead in the contest.

Voting in Vellore constituency was scheduled in April but was called off after Rs 10 crore was seized from the possession of DMK leaders in the district.

The DMK-led front won 37 of the 38 Lok Sabha seats in Tamil Nadu, polling for which was held on April 18.