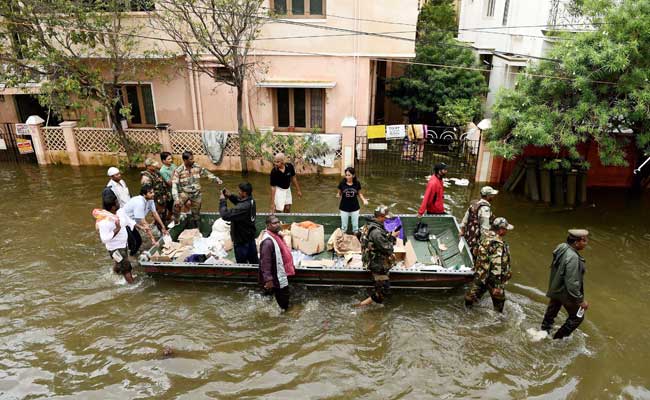 A total of 30.42 lakh families had suffered partial or complete damage to their dwelling units, including huts during the rains in Tamil Nadu last year.

Detailing the large-scale destruction caused by heavy rains in four phases during October-December last year, Ms Jayalalithaa recalled her demand for a central assistance of Rs 25,912.45 crore for the relief and restoration works.

Noting that the Central team of Inter-Ministerial officials, which earlier assessed the damage caused in the first three phases of rains, will visit the state again from tomorrow for a similar exercise, she expressed hope the Centre will release the "required" assistance based on its report.

The Chief Minister said despite the state's preparedness, the damage was "huge" on account of the unprecedented rains witnessed in the last century that caused a deluge affecting Chennai, Kancheepuram, Tiruvallore, Cuddalore, Tuticorin and Tirunelveli districts.

In a detailed statement, she said 470 persons had been killed in various rain-related incidents, most of them between October 28 and December 31, 2015.

"During the northeast monsoon period between October 1 and 27, as many as 49 persons died. 421 persons died of various reasons including drowning, electrocution, lightning strike and wall collapse between October 28 and December 31, 2015," Ms Jayalalithaa said.

Although the northeast monsoon season stretches between October 1 and December 31, it had set late on October 28 this year, she said. The government had provided relief of Rs four lakh each to families of 245 victims and the rest will be covered in the coming days, she said.

The Chief Minister pegged the area of crop loss at 3,82,768 hectares.

A total of 30.42 lakh families had suffered partial or complete damage to their dwelling units, including huts, with the government completing the survey of 14 lakh families in this connection, she said.

Ms Jayalalithaa gave away the relief amount to five persons today to mark the launch of the efforts and the cash assistance for the identified 14 lakh families will be deposited today itself in their bank accounts, she said adding the rest will be covered by January 11.

The government had announced measures like cash compensation for damage to houses, besides providing rice and kerosene, she recalled.

As far as livestock were concerned, about 98,000 cattle, poultry, goats and pigs had perished during the monsoon and a compensation of Rs 7.78 crore has been disbursed so far, she said adding Rs 12.82 crore has been provided for loss sustained by fishing community, which includes boats.

"My government is expediting the cash assistance to people affected by the unprecedented rains. Today, Rs 700 crore worth relief was distributed. The rest will be given by January 11," she said.