The doctors have been demanding demand pay parity with central government doctors, the quota for in postgraduate admissions, among others.

An estimated six lakh outpatients and more than a lakh inpatients are said to be affected by the strike.

The doctors have been demanding demand pay parity with central government doctors, the quota for in postgraduate admissions, among others.

In the heart of Chennai, at the Rajiv Gandhi Government College, only those who had elective surgeries or were battling chronic illnesses were seen at the inpatient ward.

In the waiting area, Raju, a painter, is hoping a doctor would attend to him. Down with fever over the last two days, Raju's mother fears he has dengue. "I am helpless. He could not go for work for two days," his mother told NDTV.

Valli, a domestic help, says no doctor would treat the wound on her ankle. She had spent all the money to come to the hospital. She said: "If we go to private hospitals they charge 500 rupees or 1000 rupees even if they touch us. They charge us for whatever they (doctors) spent on studying. How can we afford?" 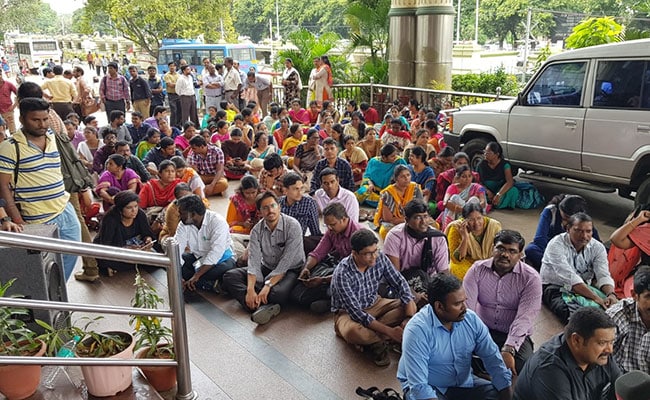 The state has employed around 18,000 doctors, who are now demanding revision of their pay bands.

An estimated six lakh outpatients and more than a lakh inpatients are said to be affected by the strike.

Dr Balaji, an Oncologist with 15 years of experience, says he draws only around Rs 80,000.

That, according to him, is 40 thousand less than what central government doctors with similar experience earn. He added, "With Rs 80000 how can I live in Chennai? I've to look after my daughter and my family. I should have a doctor's lifestyle. Is it possible with Rs 80,000?"

Doctors deny they are holding poor patients to ransom. They say their demand was raised two years ago and that the government is yet to address the issue despite a court order.

Health Secretary Dr Beela Rajesh told NDTV: "Doctors' demands are being considered. Doctors have been told to ensure not to cause hardship to patients. We've issued a circular to monitor attendance and no leave to be given."

The issue took a political turn after a steady stream of political leaders addressed the striking doctors, some visiting patients, too.

DMK chief M K Stalin today appealed to Chief Minister Edappadi Palaniswami to intervene and asked doctors to not turn away patients. DMK MP  Dayanidhi Maran also said: "This could have been averted.

We had raised six weeks ago. Pay parity demand by the doctors is legitimate. The cost of living has gone up. Tamil Nadu doctors are the best. They deserve more."

There is criticism that government doctors also do private practice. However, doctors say only around twenty percent of doctors have practice privately and others are dependent on a government salary.

The doctors' demands, if met, would cost the government 300-crore a year.