At least 20 people, including five women, were killed when the Kerala State Road Transport Corporation bus collided head-on with a lorry near Avanashi town, about 40 kms from Coimbatore, officials said. 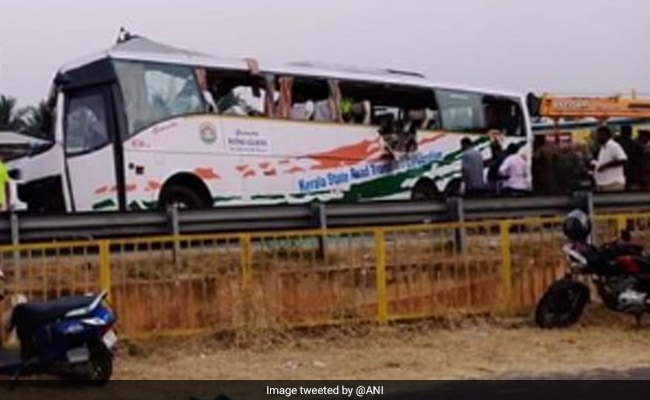 It was a "black Thursday" for 48 passengers, majority of them Keralites, who travelled in a state-run bus that collided with a container lorry in Tirupur district of neighbouring Tamil Nadu in the early hours of Thursday.

At least 20 people, including five women, were killed when the Kerala State Road Transport Corporation bus collided head-on with a lorry near Avanashi town, about 40 kms from Coimbatore, officials said.

Twelve of the 20 dead have been identified, Palakkad Superintendent of Police Siva Vikram told news agency Press Trust of India.

"It was a high speed collision. The container lorry lost control. We do not know if the driver dozed off or the tyre burst. The lorry entered the wrong lane and crashed into the KSRTC bus coming in the opposite direction," he said adding "We are taking the names and details."

According to reports, most of the passengers were from Palakkad, Thrissur and Ernakulam districts of Kerala. Passengers, including women, who had a narrow escape from the tragedy, were yet to recover from the fact that many of their co-travellers had lost their lives.

Karishma, who was on her way to Ernakulam, said she was seated on the left side of the bus and was sleeping when the accident happened. "The incident took place by around 3:15 am. When I woke up suddenly, I saw many people running around and the injured being taken to ambulance," the shocked woman told media.

Alan, another passenger from Kerala, said he was still finding it difficult to get over the shock. "I have sustained a minor injury on my leg. But my friend is injured on the nose and I am taking him to hospital, now," he said.

Jemin George, an injured passenger, said he suffered a cut on his lips and ten stitches on his forehead. "I didn't know what happened actually. I was sleeping in a seat behind the driver's seat," he said adding that he was referred to a hospital in Coimbatore.

A weeping woman passenger said the container lorry was overloaded and there was not many vehicles on the road when the incident took place. She said the right side of the bus was fully damaged.