The RK Nagar assembly bypoll is being held to fill the vacancy caused by the death of sitting MLA and AIADMK supremo J Jayalalithaa in December last year. 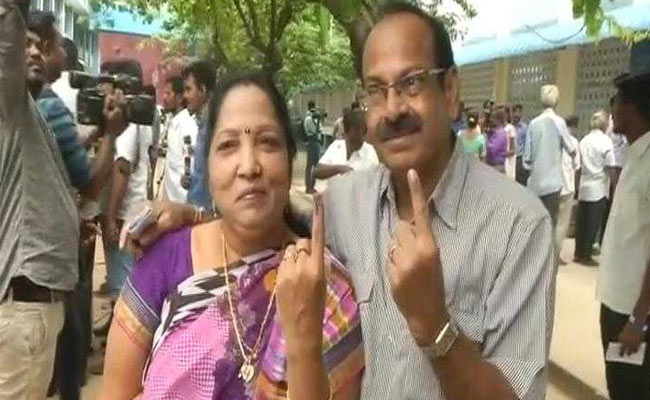 RK Nagar Assembly Bypoll: The polling process is being monitored by nine observers.

Chennai: Polling progressed at a brisk pace in the RK Nagar assembly constituency, with an estimated 41 per cent of the electorate casting their votes by 1 pm in the prestigious by-election.

Election authorities said 41.6 per cent of the 2,28,234 voters in the constituency exercised their franchise by 1 pm and there were no reports of any untoward incident so far.

A few issues related to Electronic Voting Machines (EVMs) were immediately sorted out and polling was "brisk", they said.

The by-election is being held to fill the vacancy caused by the death of sitting MLA and AIADMK supremo J Jayalalithaa in December last year.

Earlier, polling began at 8 am, with people arriving to exercise their franchise across booths in the constituency in North Chennai, braving the misty conditions.

The bypoll is being seen as an acid test for the AIADMK, as it is the first election since the death of Jayalalithaa and after it got the 'Two Leaves' election symbol back following the merger of the factions led by Chief Minister K Palaniswami and his present deputy and former rebel O Panneerselvem.

Jailed leader V K Sasikala-Dhinakaran camp lost the symbol case before the Election Commission which last month held that the EPS and OPS group commanded majority in the party's organisational and legislature wings.

Though as many as 59 candidates are in the fray including from the BJP, it is mainly seen as a fight between the AIADMK, its rival faction led by Mr Dhinakaran and DMK.

Promoted
Listen to the latest songs, only on JioSaavn.com
Elaborate security arrangements are in place with about 2,000 state police personnel, 15 companies of Central Armed Police Forces, including CRPF, deployed across 256 polling stations.

The polling process is being monitored by nine observers, considered the highest for a single assembly constituency. This includes general, special, police and expenditure officials.