The death of a 23-year-old techie, R Subashree, last month had sparked outrage as she was killed after an illegal banner put up by an AIADMK functionary in Chennai knocked her down from her scooter and a water tanker behind hit and killed her. 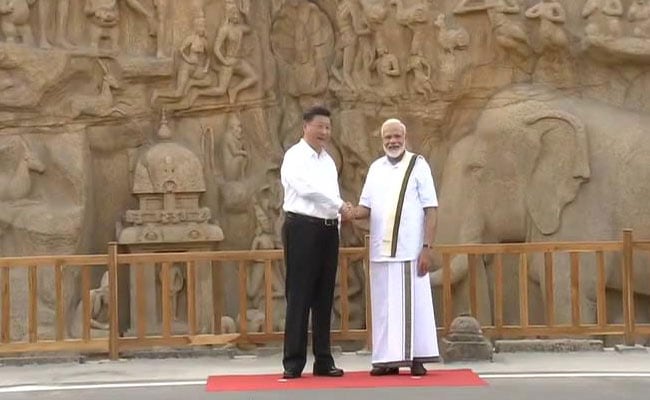 In what many call a welcome change, the Tamil Nadu government and the centre did not put up even a single banner welcoming the visiting Chinese President Xi Jinping and Prime Minister Narendra Modi for the two-day informal summit in Mamallapuram, near Chennai.

The death of a 23-year-old techie, R Subashree, last month had sparked outrage as she was killed after an illegal banner put up by an AIADMK functionary in Chennai knocked her down from her scooter and a water tanker behind hit and killed her.

The Madras High Court, which had banned the putting up of banners, come down heavily on the state government for its failure to stop the erection of illegal banners and hoardings. The court had even asked, "How many litres of blood you need? Government officials look like blood suckers... Lives are lost due to irresponsible officers... There is zero respect for lives... Will people attend events only if there are banners? The Chief Minister and all party leaders ought to issue statements to stop erecting banners."

Despite this, the state and central governments had informed the court about their plans to erect more than 30 banners at designated locations welcoming the visiting leader. The court had asked the government to strictly follow all norms.

Deeply hurt, R Geetha, the mother of Subashree, had appealed to the prime minister to stop this saying, "If the PM would intervene, this would not happen. If he does this, will be good." She had added, "Our daughters soul would not rest in peace."

In another insensitive move, AIADMK spokesperson C Ponnaiyan had recently said in an interview, "The AIADMK functionary had not intentionally put up the banner to kill anyone. If at all any case has to be registered it should be against the wind which blew it down."

Today, R Geetha said, "I thank the Prime Minister. I am very relieved and happy there was no banners put up. This should become the norm. None should suffer like us. None should lose life because of banners."

Explaining the developments that led to the U-turn, a senior bureaucrat in the Information Department of the state government told NDTV, "The Chief Minister was very clear. He did not want to hurt anyone. We understand the Prime Minister too had advised him against putting up banners."

BJP spokesperson Narayanan Tirupathi said, "We are clear. We don't want to erect any political banners as it's a violation. We respect public sentiment."