Most Of Oil Spilled At Ennore Recovered By Coast Guard Ships

Although most of the spilled oil has been recovered, the traces are being recovered/dispersed, Coast Guard said. 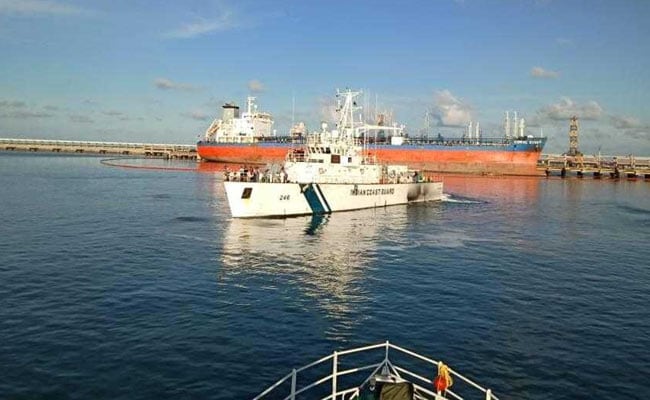 The oil spill took place at the Kamarajar Port in Ennore, around 20 km from Chennai

Although most of the spilled oil has been recovered, the traces are being recovered or dispersed, Coast Guard said.

In a statement, the Coast Guard said its specialized pollution control vessel, Samudra Paheredar, along with five other ships were pressed into action to recover the spilled furnace fuel oil (FFO).

"The specialized equipment on board ICGS Samudra Paheredar proved critical for recovering the thick oil mousse and preventing it from reaching the shores. About five tonnes of viscous mousse has been recovered using weir, disc, brush skimmers and manual mopping using absorbents," said the Coast Guard.

On Sunday P. Raveendran, Chairman and Managing Director, Kamarajar Port, told IANS: "The oil tanker Coral Stars was discharging fuel on Sunday morning. Suddenly one of its flexible pipes broke resulting in a small amount of oil spill on the berth and around the ship."

He said about 2 tonne of thick oil got spilled. The discharge was stopped immediately and fence booms were deployed around the tanker to prevent the oil spread.

According to Coast Guard, while the ships were taking care of the seaward front, the aerial assessment provided the needed inputs about the location and movement of the spilled oil and critically aided in designing and implementing recovery/dispersal process.