"Mahagathbandhan Will Unravel": Kamal Haasan On His Party's Anniversary

The actor-turned-politician said this at an event held in Tirunelveli to mark the start of the Makkal Needhi Maiam's second year in existence. 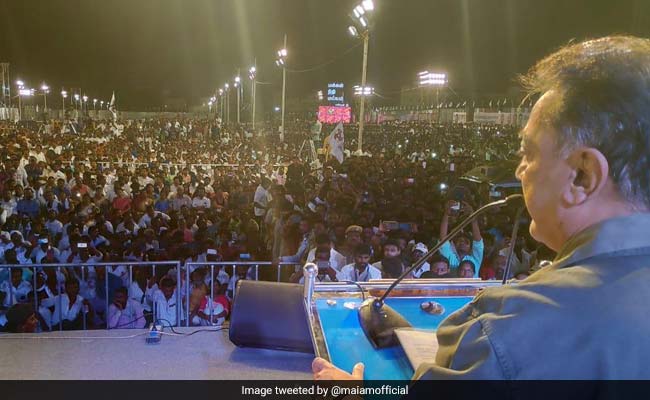 Kamal Haasan at the first anniversary of his party, Makkal Needhi Maiam, on Sunday.

Actor-turned-politician Kamal Haasan on Sunday declared his party -- the Makkal Needhi Maiam (MNM) -- as the "A Team" of Tamil Nadu, and expressed confidence that it would emerge victorious in every election to come. "I am not BJP's B Team, but Tamil Nadu's A team. We shall win not just 40 seats but 60," he said at an event held in Tirunelveli to mark the start of his party's second year in existence. He also revealed why he did not have much faith in the Mahagatbandhan or "Grand Alliance" being stitched together by the opposition to take on the BJP.

By 60 seats, Mr Haasan was referring to the 39 Tamil Nadu commands in the Lok Sabha and the 21 left vacant in the state assembly following the Madras High Court's decision to uphold the disqualification of several AIADMK legislators loyal to TTV Dhinakaran. The opposition DMK terms his party as the BJP's "B Team", maintaining that it will only serve to divide the secular vote in the Lok Sabha elections.

The MNM chief criticised the AIADMK government in his address. Tacitly referring to the police shooting that killed 13 anti-Sterlite protesters last year, he said: "They shoot those who ask questions in the mouth."

Taking on Prime Minister Narendra Modi, he said: "The MNM will provide a voice that at least demands a change of Prime Minister. As for the opposition's Mahagathbandhan against the BJP, it will untwine. They will soon start switching sides and walking out of the alliance."

Mr Haasan, however, expressed confidence that the party he launched in Madurai last February has evolved enough to take on the behemoths of Indian politics. "We are clean and honest, and we shall remain so. Let's uproot casteism and nurture equality together. Let's teach this generation what democracy actually stands for," he said, adding that they have very little time on their hands to change Tamil Nadu for the better.

Fellow-actor Rajinikanth, who has also joined politics, congratulated Mr Haasan on the occasion soon after. "The Makkal Needhi Maiam leader has decided to contest the elections just as his party enters its second year. Kamal Haasan, my dear friend, I congratulate you heartily," he tweeted.

Rajinikanth has decided to skip the upcoming Lok Sabha polls to focus on the 2021 Tamil Nadu elections.