"Protests Against Sarkar Were Not By AIADMK Workers": K Palaniswami

The Chief Minister, while questioning the source of funding for the film, asked: "They spend Rs 300-500 crore to make a film, where does this money come from?" 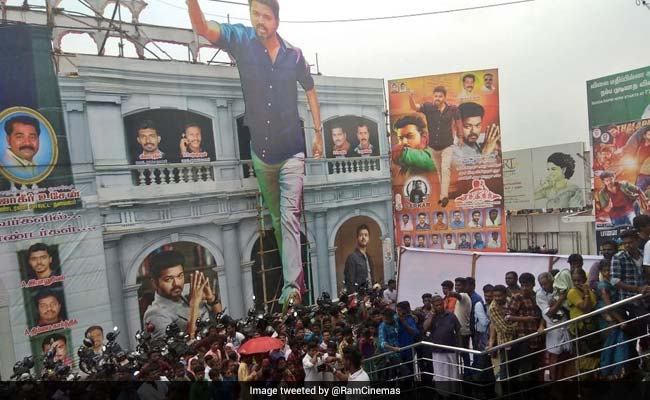 Sarkar into trouble over some scenes that allegedly criticised the Tamil Nadu government.

Amid reports suggesting that All India Anna Dravida Munnetra Kazhagam (AIADMK) workers vandalised the posters of the movie 'Sarkar' while protesting against the release of the film, Tamil Nadu Chief Minister Edappadi K Palaniswami claimed that it was a protest by common people and not AIADMK party workers.

"It wasn't AIADMK. It was a protest by common people. Through the movie, schemes of the government are being criticised vehemently," Mr Palaniswami said at a press conference in Coimbatore.

The Chief Minister, while questioning the source of funding for the film, asked: "They spend Rs 300-500 crore to make a film, where does this money come from?"

After protests were witnessed against the alleged negative portrayal of late AIADMK Chief J. Jayalalithaa in the Vijay-starrer, the Central Board of Film Certification (CBFC) had made three cuts in the film and removed certain objectionable scenes.

In a new certificate issued by the CBFC, the three cuts have reduced the duration of the movie by five seconds. Previously, the runtime of the movie was 164 minutes and 46 seconds, which has now been revised to 164 minutes 41 seconds.

The movie ran into trouble over some scenes that allegedly criticised the Tamil Nadu government led by Jayalalithaa.

The first cut in the movie deleted the "visuals of throwing mixie and grinder in fire", which was 5 seconds long. The second cut involved muting the name 'Komala' "from the full name "Komalavalli" (wherever it occurs)". The name was even removed from the "corresponding subtitle". In the third cut, the dialogues 'Podhuppaniththurai' which roughly stands for Public Works Department, and '56 varusham' or 56 years were muted and was removed from their corresponding subtitles. The movie will now be shown with a U/A certification.

On Thursday, protesters tore the posters of the movie in Coimbatore, Madurai, and Chennai and demanded the arrest of the film's director A.R. Murugadoss. However, the Madras High Court on Friday issued a restraining order against his arrest till November 27 after he sought an anticipatory bail in this case.

The agitated protestors had also vandalised theatres where the movie was being screened.

Earlier, Tamil Nadu Law minister C.V. Shanmugam had condemned Vijay's recent release for allegedly attempting to instigate violence and said that it was not less than a terrorist instigating people for violence.

The film, which released on November 7, earned over Rs 100 crores within two days of its release.