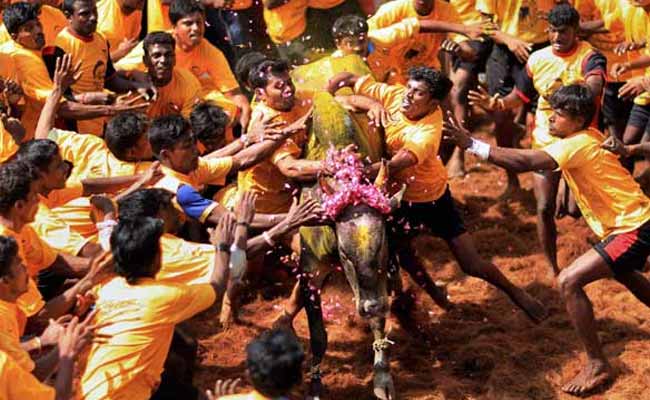 Supreme Court rejected state's plea that Jallikattu should be allowed as it is 5,000 years old tradition

New Delhi: The Jallikattu may be 5,000 years old, but whether the controversial bull fighting sport can continue will be decided legally, the Supreme Court told Tamil Nadu in sharp remarks today.

Rubbishing the state's plea that Jallikattu should be allowed because it is a centuries old tradition, the court said, "In 1899, ten thousand girls below 12 years of age were married. Should we allow it today because it was a tradition at that time?"

The court said that it was a "constitutional and statutory issue" and that it would examine whether such a sport was permissible in law or not.

The top court is hearing petitions by animal rights activists against the Centre's decision early this year to allow the traditional Tamil Nadu bull fight. The court had in January this had stayed a notification issued by the Centre to lift a ban on Jallikattu and had issued a notice to it. Final hearing in the case will begin on August 23.

Jallikattu means "bull-taming," and bulls are let loose as young men compete to subdue them. The sport, usually held in the "Pongal" season in February to celebrate the winter harvest, was not held this year with the court intervening just five days after the centre lifted the ban imposed by the previous Congress-led government.

All political parties in Tamil Nadu have lobbied hard for the event to be allowed. In court, the Tamil Nadu government has argued that there are safeguards aplenty to ensure the animals are not harmed and that activists have "no fundamental rights" to challenge a tradition.

Unlike the famous Spanish bull fight, the aim of Jallikattu is not to kill the animals. But critics say the bulls are fed liquor and have chilli powder thrown into their eyes before they are released from a holding pen and chased by revellers.

There have also been reports of bulls having their horns sharpened with broken glass, while the "taming" can lead to serious injury and a painful death for the animals.

Over the years, dozens of people have also been killed and hundreds more wounded at Jallikattu events.