A poem published in the Tamil daily 'Namadu Amma' refers to Kamal Haasan as a "coward". There is also an apparent reference to superstar Rajinikanth. 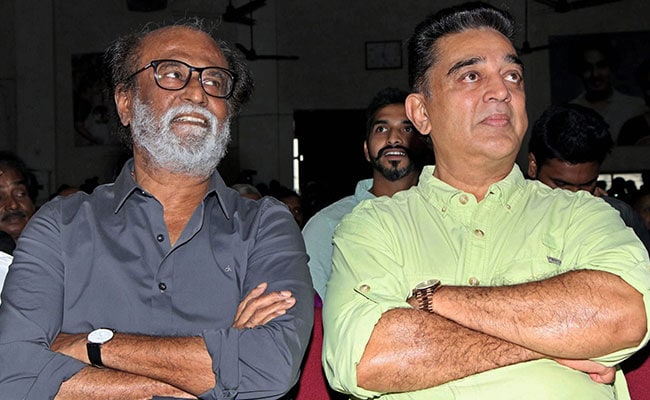 Chennai: Invoking late Chief Minister J Jayalalithaa, a mouthpiece of the ruling AIADMK in Tamil Nadu has dissed actors Kamal Haasan and Rajinikanth and a group of film directors critical of the ruling dispensation as a "gang of clowns".

A poem published in the Tamil daily 'Namadu Amma' refers to Kamal Haasan as a "coward", taking a swipe at him for his political foray. It also makes an apparent reference to superstar Rajinikanth, who announced his political ambition in December last year but has not yet announced the name of his party.

"Just because your voice 'I Jayalalithaa' will no longer sound, even the coward who screamed to leave the country gets the courage to start Maiam. The top actor too gets the urge to start a party", the poem reads.

Mr Haasan, 63, floated his own political party called Makkal Needhi Maiam (People's Justice Centre) in February this year --- a move seen as an attempt to fill the political void created after the death of J Jayalalithaa and the political inactivity of DMK chief M Karunanidhi due to bad health.

The actor, who arrived in Delhi a couple of days ago to complete the formalities for registering his political party, met Sonia Gandhi on Wednesday and Congress president Rahul Gandhi the day before. Describing the meetings as a courtesy call, Mr Haasan said it was too early to speak of any tie up between his party and the Congress.

Mr Haasan has been overtly critical of the AIADMK government over issues ranging from corruption, police firing on anti-Sterlite protesters in Tuticorin that led to 13 deaths and the arrest of those opposing a proposed eight-lane green corridor between Chennai and Salem.

Although the AIADMK has hit back at Mr Haasan in the past, the party has largely been subdued  in its criticism of Mr Rajinikanth, who has announced that he would launch a party that would contest all 234 assembly seats in Tamil Nadu in the next elections due in 2021.

Earlier this year, the superstar had said he was stepping into politics as there was a "vacuum" in Tamil Nadu politics. The actor who visited Tuticorin last month had drawn sharp reactions for holding "anti-social elements" responsible for the violence --- a statement that was seen echoing the state government's line.

Promoted
Listen to the latest songs, only on JioSaavn.com
The AIADMK mouthpiece also took on a number of film personalities who have been critical of  the AIADMK government.

"Just to put in place this gang of clowns can't you (Jayalalithaa) come to the fort (secretariat) just for one day", the poem said.