Mr Stalin visited the woman who is recovering at a private hospital and handed over the cheque on behalf of the party. 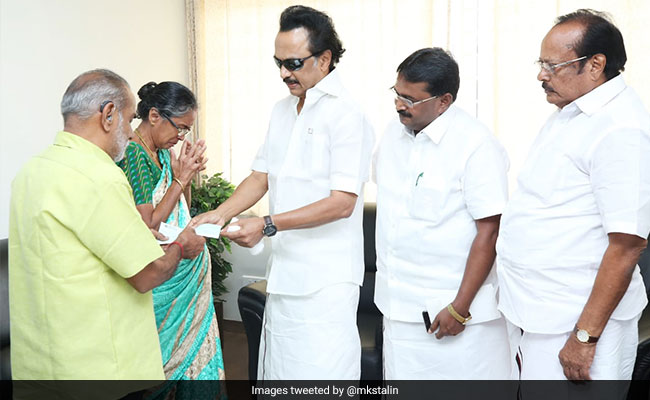 DMK President MK Stalin on Sunday handed over a cheque of Rs 5 lakh to the parents of a 30-year-old woman whose leg was amputated after a truck hit her scooter while she was trying to avoid a falling flagpole in Coimbatore recently.

Mr Stalin visited the woman who is recovering at a private hospital and handed over the cheque on behalf of the party.

The woman was on her way to work last week when the incident occurred and her left leg was amputated from the knee on Friday.

The incident kicked up a row with the DMK raising the issue of erecting flagpoles especially after a banner, allegedly put up by an AIADMK worker, fell on a woman techie and she was run over by a lorry in Chennai recently.

Speaking to reporters after visiting the woman, MK Stalin took a dig at Tamil Nadu Chief Minister K Palaniswami for his remarks that he was not aware of the accident involving the flagpole.

He alleged that the police has registered a case against the lorry driver but not against those who erected the flagpole.

Mr Stalin said he has assured the family that his party would extend help if the woman required an artificial limb.

J Jayalalithaa's House "Veda Nilayam" To Be Acquired For Her Memorial