The video also shows the BJP chief smiling, seemingly oblivious, while the man was pulled aside and beaten up behind her.

An elderly auto driver in Chennai was yanked aside and roughed up after he asked Tamil Nadu BJP chief Tamilisai Soundararajan about rising fuel prices during an interaction with reporters on Sunday night.

In a video that has gone viral and broadcast widely on local channels, the khaki-clad auto driver standing behind Dr Soundararajan can be seen being elbowed twice, shoved away and roughed up by a BJP functionary standing next to her after he said, "One minute Amma, the centre is increasing fuel price."

The video also shows the BJP chief smiling, seemingly oblivious, while the man was being assaulted behind her.

The auto driver, identified as Kathir, later told the media: "I only expressed my anguish about how auto drivers are affected but they took it in a wrong sense. This is what happened. We need at least five hundred rupees for our food and other expenses every day. But with petrol prices going high, we get only three hundred and fifty rupees after paying the auto-rent." 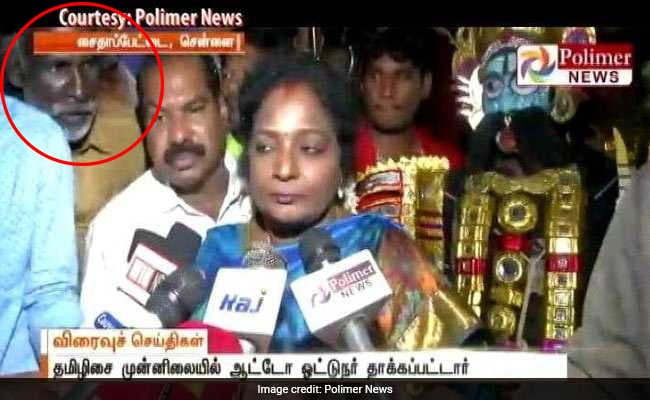 Petrol prices have touched Rs 85.31 per litre in Chennai, increasing the burden on many like Kathir. In Cuddalore district, where the price touched Rs 87.03 per litre, two different couples were presented with cans of petrol as wedding gifts.

A BJP leader who requested not to be named said, "The way the man asked the question, our functionaries thought he was drunk. He was roughed up yes but not beaten."

Petrol prices in some parts of Maharashtra crossed the Rs 90 per litre mark on Monday.

Rising fuel prices have drawn sharp attacks on the ruling BJP from the Congress. The opposition party had called a nationwide strike for a day last Monday to protest.